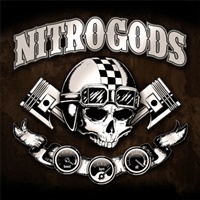 The hard rock/ metal Mecca within Europe remains Germany. So many stories to tell from their international output (Scorpions, Accept, Helloween, and Kreator to name four of thousands) to their long standing summer festival traditions (who hasn’t heard of Wacken these days?), it’s little wonder that as bands retire and wither away, newer domestic ones pop up ready to establish themselves. Two of the three members of Nitrogods probably have decent familiarity with the traditional/power segment of the population. Guitarist/vocalist Henny Wolter has been in Primal Fear and Sinner in the past- and drummer Klaus Sperling is currently in Freedom Call but also performed with Henny in Primal Fear’s early years. The third member is bassist/main vocalist Oimel Larcher, who’s bar brawl worthy vocals and steady Lemmy-like bottom end work fits like a glove on this 12 song debut album.

Nitrogods are a throw back act for certain. The basics of blues based hard rock employ four on the floor drum tempos, a series of tight chord segments injected with a sense of energy and Southern Rock meets AC/DC charm, and a vocal delivery that would be nails on a chalkboard to the mainstream yet oh so exciting to the conventional Lemmy or Dan McCafferty appreciator. Henny’s riffing on songs like “Rifle Down” and the cowboy-ish “At Least I’m Drunk” has as much reference to Rose Tattoo or Motorhead as it does to ZZ Top (pre- “Eliminator” mind you) or Mama’s Boys. “Black Car Driving Man” and “Gasoline” rebel rouse and surely incite the older generation not only with this feeling of youthful nostalgia but also evoke the air guitarist, drummer or vocalist to climb out into the present day.

Then there’s the guest appearance from Nazareth’s Dan McCafferty who gladly trades off verses with Oimel on “Whiskey Wonderland”. The former channeling his best “Razamanaz”-like blues voice and the latter handling the super low, Billy Gibbons-ish parts and the harmonica adds another brilliant touch to this highlight of the record. You also don’t get better accurate commentary about live rock stars and the Autotune woes than the lyrics to “Lypsynch Stars” – because good hard rock isn’t about short cuts or the easy way- it’s about practice, resolve, blood, sweat, and tears.

Nitrostars are a fun loving, hard rock act and if you appreciate the groups I name-dropped, this could be a winner with you. Looking forward to more records from this trio, brings me back to my early years in the movement.