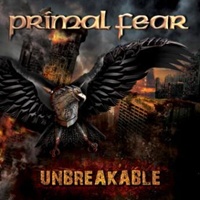 This German band’s determination to remain at the forefront of the traditional power movement is unwavering. Since the late 90’s Primal Fear have been averaging a new studio album every 18 months, following lengthy touring cycles and adequate down time. The younger crew could learn a thing or two about their obvious attention to professional detail and outstanding time management- keys to maintaining a presence in a crowded metal scene.

“Unbreakable” is the latest platter from the five piece, with vocalist Ralf Scheepers and bassist Mat Sinner continuing their Judas Priest-style riff attack and equally roaring, high pitch vocals. Drummer Randy Black pushes his feet and hands to the brink on the double bass/ quick fill excitement that is “And There Was Silence”, with the guitar duo of Alexander Beyrodt and Magnus Karlsson hitting numerous cultural-like harmonies. “Marching Again” rivals the best Finnish or Italian power picking, with Ralf snarling in his multi-octave capacity and hitting dog whistle notes during refrains and choruses. “Unbreakable (Part 2)” is a 6 minute plus tour de force, another melody challenging number with the iron lungs in full effect during the trailing chorus passages.

The softer, more orchestrated side of recent years comes up on the ballad “Born Again”- opening with darker acoustic guitars and choir-oriented vocals, this could be a cousin to “Fighting The Darkness” from 2007’s “A New Religion”. Otherwise the bulk of “Unbreakable” gravitates towards the mid-tempo anthems certain to meet with fist pumping approval from the PF throngs- my favorites including “Strike” and “Metal Nation”. The eagle mascot graces the cover once again- and at this point in time Primal Fear aren’t about to shake the foundation with less than what their metal appreciators desire.

There are some who believe Primal Fear is nothing more than a tribute to the greatness of Judas Priest. “Unbreakable” to me is another solid slab of potent traditional songwriting- with more variety than their older days, they subscribe to a dynamic approach which should bring the crowds out again on tour.