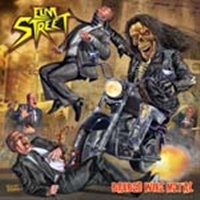 Australian traditional metal with numerous clichés at hand on this quartet’s debut album “Barbed Wire Metal”. Gang-like thrash/crossover choruses, 3 songs with the word ‘metal’ in the title, a boat load of twin guitar lines, and this overwhelming sense of love for Grim Reaper, Manowar, and Judas Priest on this 8 song effort. “Elm St. Children” even contains a solo spot for bassist Brendan Farrugia, and the hooky guitar line in “Leatherface” directly rips on Powermad’s “Nice Dreams”- which can be a good or bad thing depending on your perspective.

As decent as the musical chemistry is on “Barbed Wire Metal”, all is lost the minute rhythm guitarist Ben Batres opens his larynx to sing. Ben has a strained, throaty range- as if you melded Dave Mustaine, Jon Oliva and Chuck Billy together but without any sense of sustained note holding abilities. I feel Elm Street would benefit so much more with a stronger Halford/Dio type singer who could just reach for the sky when called for. “Heavy Metal Power” drains my energy because of his monotone verse patterns which are more of a talking variety than real melodic singing.

Pegazus domestically put this band to shame- and they aren’t even close to the caliber of their Scandinavian contemporaries like Wolf, Enforcer, or Steelwing. There were some killer guitar hero moments on “The Devil’s Servants”- but overall Elm Street offer nothing more than a cut and paste job of their favorite 80’s albums at this point in their career.

JONATHAN DAVIS AND THE SFA – Live at the Union Chapel