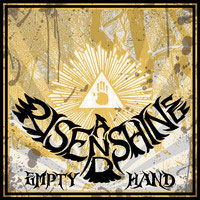 Swedish stoner doom with a psychedelic edge and a definite 70’s vibe on this fourth album “Empty Hand” by Rise And Shine. Even though the lineup has shuffled around through the years from their mid 1990’s start until today, female vocalist Josabeth Leidi is the one constant for this self proclaimed ‘flower power metal’ act. What dominates the quintet’s sound is a framework of Black Sabbath styled riffing played often at a plodding to mid-tempo pace, as the vocals evoke the crazy, unhinged melodies of say Janis Joplin if she were to croon in an emotionally heavy band.

Guitarists Joakim Knutsson and Daniel Josefsson weave some cool dual leads in a slow, easy going manner for the tail end of the solo within “Empty Words” which gives them a little Thin Lizzy buzz to the normal Zeppelin and Sabbath riff proceedings. Much of the riffing on a song like “Someone Else’s Share” just has a lot of peaks and crescendos that keep your ears engaged a little longer than most doom/ stoner rock acts- along with a rhythm section that play at varying tempos to keep things interesting. The appropriately titled “Harmony And Noise” also works off of both principles from the echoing introduction moments to more of a fuzz box swirling effect that builds through the course of the 6:49 construct. And bonus points must be taken into consideration for constructing their band logo in the shape of an eagle- as the abstract yellow, brown and black colors for the cover bring new meaning to the ‘1000 words’ concept.

There’s a mixed feeling about the total outcome of “Empty Hand” for me. I think separately you have an amazing vocal presence and some killer doom/ stoner rock musically. I don’t know if when you put both together you just have all the right chemistry in place for Rise And Shine to ascend much beyond a small bar band.