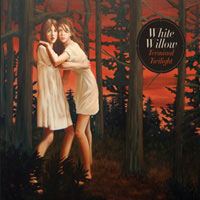 When in doubt, turn your sound inside out. Such is life for Norwegian progressive rockers White Willow, who on their sixth album “Terminal Twilight” turn back the proverbial clock and record this effort in their own attic, with primitive equipment and raw engineering principles. Employing a kitchen sink musical outlook, 70’s keyboards reside against waves of art pop and gothic textures, the guitars alternating between Genesis-like electricity and spirited acoustic outlooks. Sylvia Skjellestad returns after a brief one album break and brings home a mesmerizing vocal performance, hypnotic at times on the tribal “Snowswept” and providing adequate counterpoint melodies on the ballad “Kansas Regrets” where the acoustic strumming mirrors the classic work of Queensryche’s “Silent Lucidity”.

Guitarist Jacob Holm-Lupo channels all of his best David Gilmour, Steve Hackett and Steve Howe knowledge and the spirit of its application comes shining through on the tender restraint of an atmospheric epic like the 8:53 “Red Leaves” – where once again choir vocal accents prove White Willow aren’t merely content to emulate but rather set the originality standards. Two of the nine tracks clock in over the 10 minute mark, so patience is a virtue when encompassing all of the quieter transitions, be it simplistic echoing guitar lines against a wash of funky bass and drum jam tendencies for “Floor 67” or the note bending keyboard theatrics throughout “Searise”.

The latest generation who push the parameters of progressive rock understand that you don’t have to be a technical wizard and purely egomaniacal regarding your songwriting craft. “Terminal Twilight” builds and relieves tension, giving the imagination thousands of images and word pictures to unravel. This isn’t an every day listening excursion – yet when taken at full headphone value, rest assured you’ll leave a complete different person.