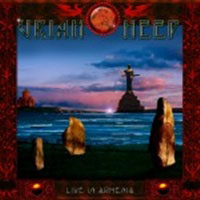 Still living and thriving 40 years plus in the business, the UK institution known as Uriah Heep release another double live CD from their 2009 touring cycle. Pumping out hard rock with the progressive organ flair, the listener receives 15 songs that run the gamut from recent favorites like “Tears Of The World”, “What Kind Of God”, and “Shadow” standing side by side against the reverent classics “Look At Yourself”, “Easy Livin’” and “July Morning”. It’s interesting to hear vocalist Bernie Shaw chastise a patron for filming the concert during the intro to “Stealin” – when the band are obviously recording the event for future release. Such is the life of musicians protecting their creative property in download times I guess.

Guitarist Mick Box may be the sole original member left in the fold, but the core of this current lineup have been together the better part of 20 years – and there’s something to be commended for the love and respect the quintet have for Uriah Heep’s vast discography. Keyboardist Phil Lanzon establishes his presence within tracks like “Angels Walk With You” and “Sunrise” – throwing down the killer solos and all around middle range rhythm sonic needs of the band. The band never rely on backing tapes or piped in technology – it’s traditional, live instrumentation and the energy exchange between each musician to form an exhilarating hard rock stage show.

Never fear, Uriah Heep haven’t lost their edge for prolonged arrangements and lyrical outlooks on the magical, mystical and fantasy realms. Which is fine by me, “Live In Armenia” proves that retirement doesn’t appear to be on their radar screen anytime soon – and when you are still in top form vocally and musically, why consider the thought?