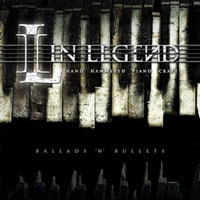 Not your average cup of tea here, Germany’s In Legend play a dramatic filled gothic tinged style of music where the prominent instrument is… the piano. The work of one man in the studio – Bastian Emig chants, hammers, drums and programs through these 14 songs, with the only additions being a guest female spot on “Stardust” and a violin appearance on “At Her Side”. Much of the material has a cross pollination feel of latter day Paradise Lost, Amorphis and possibly Kamelot in terms of the speed factor as well as the mix of darker themes.

“Vortex” is an intriguing song, especially with lyrics that encourage circle pits yet the melodies come off with an 80’s new wave/Real Life atmosphere. “The Healer/ Remedy” has that pep in its step that should be a crowd favorite when In Legend’s plays out live – the chorus may be straight out of melodic death terrain but the main vocal delivery through the verses mirrors the addictive and catchy riff parts. 14 songs may be wearing out an album’s welcome, I do believe there could have been a couple of tracks that should have been left on the cutting floor (“Yue” is a 5 minute tranquil piano solo that doesn’t advance the album much, and “Prestinate” veers a little too close to industrial light for my tastes) but one thing I can say In Legend has going is their style is unlike the rest of the heavy music camp.

If Van Canto can make their mark with vocal led metal, In Legend should have an equal left of center chance based on “Ballads ‘N’ Bullets”.