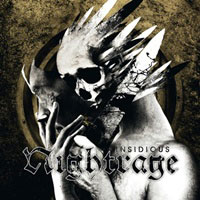 Greek melodic death metal band Nightrage assault the eardrums again with their fifth full length “Insidious”. Leader/guitarist Marios Iliopoulos knows the band has moved beyond the early Gus G assisted years into their own explosive act, gaining the services of Dragonland guitarist Olof Morck to shore up the double electric attack. Of the 15 tracks on “Insidious”, 12 are full songs and many outside guests lend their vocal or instrumental talents to beef up the impact – from Tom S. Englund and Tomas Lindberg to their friends in Firewind Gus G and Apollo Papathansio to name four of the seven outside players in the mix.

Focusing solely on the finished product, Nightrage have this sense of knowing what they like to play and hope to accomplish with their brand of melodic death metal. Their quick hitting sweeps and harmonies have much in common with the Gothenburg movement, distilling early In Flames, Sacrilege and Dark Tranquility through their own nuances with killer tracks such as the blistering fist to face “Cloaked In Wolf Skin” where the wall of guitars and thunderous drumming bludgeons the mind as well as multiple catch and release harmony moments in “Poisoned Pawn”. Main screamer Antony Hamalainen also employs more of a two part European, one part American death voice where he can be angry and not reside within the same monotone note scale – his best work appearing on the mid-tempo “Hate Turns Black” where Olof and Manos earn their technical shred licenses. Moving into more atmospheric pastures with “Solar Corona” gives Nightrage a chance to flex some intuitive clean dynamics, a great song to include the emotional tender voice of Mr. Englund and possibly something for the five-piece to explore more often on future records.

Using two studios in Greece and Arizona for the recording and mixing/mastering within the comfortable Studio Fredman, “Insidious” could possibly be the best Nightrage full length to date in an already impressive catalog. Determination plus a proper vision could equal a long career for Manos and his band mates.

MELIAH RAGE – Dead To The World