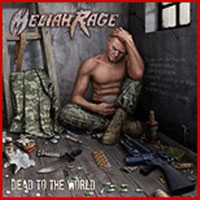 MELIAH RAGE – Dead To The World

For a local Massachusetts metal head growing up in the 80’s scene, there were two names to know if you wanted your thrash fill locally. Wargasm would be the bigger name, but initially out of the gates the band who received bigger support through Epic Records was Meliah Rage. Even with ideal touring situations opening for Metal Church in their Mike Howe prime, this five piece couldn’t achieve more than a modest cult following domestically and abroad. Yet 24 years down the line, the group are still slugging it out in the studio and on the road when they can, releasing their seventh full length of original material on “Dead To The World”.

As far as the sound of the band, Meliah Rage fall into that realm of straddling old school American power metal with thrash- which probably explains their struggles to sustain a wider appeal. Paul Souza’s vocals are heavy yet melodic, with a slight bluesy overtone on tracks like “Where Nothing Ever Grows” and the double bass killer “Cold Cruel Fate”. There’s always a sense in the guitar riffs, transitions and soloing that Anthony Nichols and Jim Koury love Michael Schenker and Ritchie Blackmore as much as they live for the Kirk Hammett and James Hetfield tag team approach. Some will assuredly believe the drumming of Stuart Dowie has not moved beyond the late 80’s in terms of his steadiness and clinical adherence to following the riff, and you see both the good (closer “Awaken Sorrow”) and the bad (the slower “Absolute Obedience”) with this percussion philosophy.

Comparable to “The Dark” era Metal Church as well as their consistent affinity for Metallica, “Dead To The World” is one of the better Meliah Rage efforts through the years. The band knows what its strengths are and isn’t attempting to change to appeal to a modern market. Decent for getting your aggressions out and remembering the early metal records of your youth – 42 minutes of unapologetic music for the lifers of the scene.