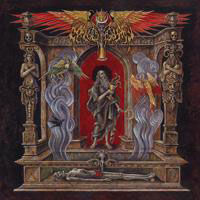 NIGHTBRINGER – Hierophany of the Open Grave

Colorado act Nightbringer have carved a seriously dark and malignant slab of evil here. "Hierophany of the Open Grave" is 60 minutes of pure skull-fucking hell. Tempos flick from languid to raging. Riffs slice flesh in one moment and cauterize the wound the next. The vocals drip vitriolic fury in what is perhaps the foulest, most poisonous BM release of the year.

The reason lies in the band’s approach and how successful they’ve been in achieving their aims. We’ve had impenetrable, difficult to listen to BM before, but very few releases have such a dense, suffocating atmosphere as this album. It is about as easy to digest as an omelette made with Satan’s icy semen. The sheer claustrophobic malevolence will suck the breath from your lungs. However, therein lies this album’s sole fault. While there are fans out there who will embrace this release as the most murderous piece of filth they’ve heard in an aeon, there are others who will balk at its inaccessibility and retreat to safer, less painful activities such as smashing their genitals with a hammer.

Nightbringer have produced something that is atmospheric, original, challenging and that most importantly pushes the envelope in terms of extremity and darkness. How many BM bands can honestly say they do that these days? Each song functions like a labyrinth set to bewilder and ensnare the weak, weaving riffs that entice you deeper into the maze. Beware!

EVENSTORM – The Return Of The Storm