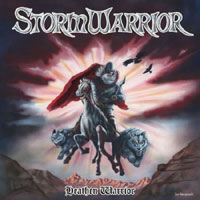 Dark Tranquillity “Void Tranquillity”, Depeche Mode “Work Mode”, Scar Symmetry “Perfect Symmetry”, Stormwarrior “Heathen Warrior”, anything in here that strikes you as odd-sounding, other than the obvious fact that the first three are made-up albums? How about the annoying and tacky naming of the album after the part of the band name? Maybe I am alone on this one, but if there should be one rule about metal it would have to be, although self-titled albums are allowed, you are forbidden under any circumstance to use PART of your band’s name in the title of an album. No exceptions!

Now that I got that out of the way, “Heathen Warrior” is a chest-pumping macho heavy metal. I am not quite sure but I think they might be singing about wars and fighting, if the Guinness record for how many times you can say “warrior” in one song so as not to oversimplify the deep meaningful existential lyrics didn’t fucking clue you in.

Okay, so I am poking at STORMWARRIOR, because, excluding the opener, this band just screams Manowar so much it’s not even funny. This is also not at all my cup of joey warrior heavy metal bands. The fact of the matter is that I could give a rat’s ass about Manowar and the whole army of copycats. This stuff just bores me to tears! I know this is “true” metal and I am supposed to love it as a metalhead but I can’t.

The opener is actually a good song that has that arena rock star vibe that recalls Europe’s “The Final Contdown” While that song was pretty cool AT THE TIME, stuff written in the actual 21st century of smart phones, iPods and iPads just sounds like it’s been forced out of the time capsule. In other words, I like my metal, hell, my music, a little modern sounding. What I mean is that I generally am wary of retro-bands. Generally. Sometimes it works, but not here.

The problem with “Heathen Warrior” album is that once the second track rolls in I had to double check that my iPod is not on repeat. The second song sounds exactly, no, it IS the same motherfucking song, except it’s track 2 now. Thankfully, this is only the case once, and the rest of the material is a tad more varied. Not too much, though. I don’t recommend this as a driving album or you WILL fall asleep behind the wheel. I guess I just don’t get the strength, the balls and the determination from this album that SW tries to convey through the lyrics. This is really arena hair metal and I was never big on that on the 80s and I am almost at the fascist level of intolerance thereof now.

Still, given the credit where it is due, the musicianship is very impressive. Solos blitz by like Germany through France in 1940. Occasionally, SW comes up with an arresting melody such the one in “And the Northern Steel Remaineth”, and that despite the cringe worthy lyrics. But the songwriting is so bad they might as well have released an album full of instrumental tracks and not actual songs. In my opinion, that’s almost what they did and the vocalist, who pretty much sings the same shit over and over with the same vocal mannerism and pitch throughout, is just a prop.

There’s just no excuse for this mediocrity on any band’s 5th album. Probably the most bias review I have ever written but 3/6 is, in my opinion, well justified if not a little too generous. Well, if that’s the case, consider that an early Christmas gift.