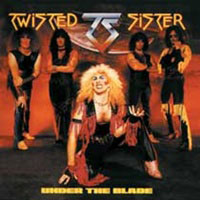 Ah yes, the mighty Twisted Sister. Before “We’re Not Gonna Take It” and “I Wanna Rock” made this New York hard rock band MTV darlings and international superstars, there were years of slugging it out in the club scene and crawling their way to gain any sort of label attention. Remember during the late 70’s and early 80’s, punk and new wave were the trends setting cash registers off, not anything close to the heaviness of Dee Snider’s snide, sinister vocals, the dual guitar appeal of Eddie Ojeda and Jay Jay French, plus the steady rhythm team of bassist Mark Mendoza and drummer A.J. Pero.

Which brings us back to the debut album “Under The Blade” – originally released on U.K. independent label Secret Records in 1982, this 9 song effort probably scared a lot of folks with not just its attitude but also the variety of material on display. “Destroyer” would be a doom metal fan’s dream. “Tear It Loose” was straight out of the fast Motörhead meets NWOBHM school, complete with a Fast Eddie Clarke guest lead. “Sin After Sin” had a lot in common with Judas Priest. And then the highlights for me would be “What You Don’t Know (Sure Can Hurt You)” and the title track – both excellent slices of homage to Alice Cooper’s influence if he took on a more metallic sheen. Given a re-mastering as best as possible, understand that the band traveled to the UK and recorded much of this album with a mobile unit on a farm – not exactly the best circumstances to make a killer record.

As a bonus you receive 4 ruff cuts that were demos recorded years before, including an early version of “Leader Of The Pack” that sounds much better here than on their “Come Out And Play” album and a live rendition of “Shoot ‘Em Down” from the Reading festival in 1982. Which brings us to the DVD. An 8 song set from that Reading Festival where the band may have started rough with the crowd (you should watch all the fruit, water, toilet paper, and unsavory objects hurled their way) but with Dee’s tough persona and the band’s relentless energy on stage, you could tell they were going places. Outside of their album material you’ll hear their Rolling Stones cover “It’s Only Rock ‘N’ Roll” where Pete Way, Lemmy and Fast Eddie Clarke make appearances for a big free for all jam session. You also get bonus interviews regarding the making of the album and the festival experience 3 decades removed – and trust me, Dee and the boys are great storytellers.

I really don’t think the American scene doesn’t get on the map without looking at the first three albums from this historic New York band. Hail Twisted Sister – pick up “Under The Blade”.