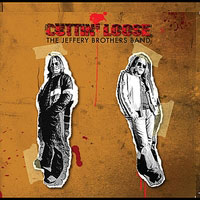 Canadian act The Jeffery Brothers consists at the forefront of twin brothers Josh and Nick – the first on lead vocals and guitars, the second on drums and backup vocals. “Cuttin’ Loose” is their second album, hot on the heels of touring North America and England as well as establishing themselves with song appearances in many of Canada’s bigger television series like Degrassi and Scooter Girls. These 9 songs are dripping with thick, classic hard rock hooks and bluesy, catchy melodies. Songs like “I Wanna Rock” and “Crime Of The Century” have as much April Wine in them as Cheap Trick or The Rolling Stones.

Josh’s delivery has a twinge of the English rock snarl but appears to be very roots rock influenced on tracks like “Sun Shine” and the 70’s Aerosmith-like “Sun Going Down”. Producer Glen Robinson (Voivod, Dave Grohl, The Ramones) gives the guitars a lot of bite and the rhythm section a lock solid groove effect. The Jeffrey Brothers have one of those no nonsense songwriting platforms – every verse, chorus and instrumental break suiting the arrangement and its purpose with no extraneous excess to bore the listener.

I do think there are times where Josh over indulges in repeating the choruses to the tedium breaking point (the title track an easy example), but within 31 minutes you’ll get enough bar based hard rock to make you forget any stress of the day or week and just literally follow what the album’s moniker sets forth. Well done gentlemen – I can see more sales across the continents with this platter.