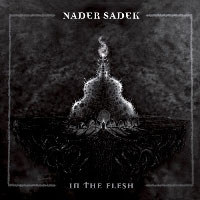 NADER SADEK – In the Flesh

"In the Flesh" was always a dead cert to be a great album. Featuring Morbid Angel alumnus Steve Tucker on vocals, Flo from Cryptopsy on skins, Blasphemer, ex-Mayhem, Aura Noir on guitar and… Nader Sadek on… well I don’t know, but apparently he is the brains behind the operation. The name might not ring a bell, but Nader is better known for his sculptures and masks (examples of which are usually not far from Attila Csihar when Mayhem play live). Attila, by the way is one of the guest artists. Then we have Travis Ryan, Tony Norman, Mike Lerner, Nick McMaster and Destructhor. Exalted company indeed. By this stage you’ll probably have guessed that the sound would be influenced by seminal death metal act Morbid Angel, and you’d be right. This album has a definite feel of the Florida titans during the mid-90’s. But there are also elements that you’ll recognise from elsewhere. For example, the rich disharmony of Blasphemer’s sparse yet densely-layered chords evoke different parts of "Ordo Ad Chao", while the pitch-shifted vocals on "Petrophilia" call "Where the Slime Live" to mind.

Never fear! "In the Flesh" is not a mere copy of greater things. Sure, it starts with elements we’ve seen before, but the way it marries these is what makes this release so special. The guitars slide between impenetrable, idiosyncratic discord one moment and soaring twin harmonies the next. The drums are brutal as you could wish for, but still varied enough to provide a dynamic base for the songs. The vocals, especially from Tucker, are outstanding. But then, once I got used to him, I preferred him to David Vincent…

On top of all that, the production is top-notch. Not one ounce of power is lost and although the sound is clean and modern it is never too clinical or plastic. Lastly, we have the classy song-writing. Once again, the balance is spot-on as familiar components are perfectly complemented by novel rhythmic passages, strange but memorable chords and innovative guitar lines. What works best is the amount of moods this band can cover in a short time; from punchy choruses that make you want to drink your weight in beer and kick a hole in something to wandering middle-eights you can lose yourself in, through barrages of crushing drumbeats to shrieking solos that work every time and get better with each spin.

This is one of the best death metal releases I’ve reviewed in the last year and if complicated schedules allow those involved future releases, then Nader Sadek are destined to join the top flight.