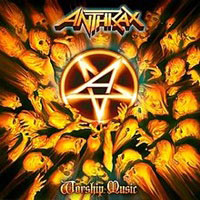 Since the last Anthrax studio album, 2003’s “We’ve Come For You All”, there have been numerous vocal shuffles within this New York thrash institution. John Bush left, Joey Belladonna returns for a 3 year reunion tour, then new recruit Dan Nelson tours with the band for a couple of years while they work on the crux of this album – only to leave in mid-2009 amidst conflicting illness/dismissal reports. John returns for some live dates, but ultimately Joey Belladonna is the main link the band (and the fans) want to see as the Anthrax front man, so the rest of Anthrax hunker down to finally get “Worship Music” on the market.

One thing you can’t say about Anthrax is creative stagnation over the course of their 30 year plus career. One of the pioneers of East Coast thrash, they were able to adjust to changing metal tides with John Bush in the 90’s and are at another peak in popularity with their recent global dates touring with “The Big 4” of thrash (Metallica, Megadeth, and Slayer). To say “Worship Music” is highly anticipated on the metal community would be a monumental understatement. The first studio album back with Belladonna in 21 years, this tenth studio record proves the band aren’t relinquishing their heaviness, their energy, their bite, their hunger to give the faithful what they most desire – a series of killer tracks designed for live stage liftoff.

The first two songs most consumers got a chance to hear before release were “Fight ‘em ‘Til You Can’t” (live renditions on YouTube aplenty) and “Caught In A Mosh” distant cousin “The Devil You Know”. Some may be surprised by the pseudo blast beats that accent the otherwise versatile “Earth In Hell” – where you get a time clock ticking during the instrumental sections and a jackhammer rhythm swing from the Scott Ian/ Rob Caggiano axe duo. Church bells signal the darker “In The End” – a song that wouldn’t be that far removed from the “Persistence Of Time” era of the band, the stair step guitar crunch navigating to a chilling effect against the bass/drum doom plodding. Other highlights include the 6 minute plus “Judas Priest” – which is almost a tribute to this legendary act in terms of the melodic guitar lines and overall epic nature of the track and closing thrash number “Revolution Screams” where Charlie Benante showcases all of his drum knowledge and off-tempo syncopation tricks.

Joey Belladonna hasn’t lost any power in his voice. In fact, I feel like he’s worked harder on “Worship Music” to balance his natural melodic rock propensity with a heavier, meaner register. We can argue until the cows come home who’s the better vocalist for Anthrax, but at this juncture few will complain about his phrasing or range on songs like “I’m Alive” or the Alice In Chains-like “Crawl”.

“Worship Music” should have the longevity to see Anthrax make in roads on multiple generations of metal appreciators. Let’s push for the next studio album to come out before I turn 50 though…