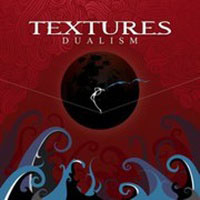 The capacity for musicians to thrive in modern music seems unparalleled. Instead of corporate machines funneling what they believe to be marketable to consumers, the switch has been flipped and fans can now wield their power with their opinions, their circles of influence amongst family and friends and as a result create a huge groundswell for the products and bands they champion. The Dutch sextet Textures know this statement to be factual – as they embrace the challenge of this fourth album “Dualism” and first for Nuclear Blast. They’ve always set out to deliver above and beyond to their fans – meticulously going over all the songs, all their imagery, all of their social media outlets, recording in their own studios – ensuring the highest quality output possible.

Their first three albums on Listenable Records established their musical vision – painting streams of sound waves in an experimental fashion between progressive rhythms, ambiance, as well as modern power along with diverse vocal approaches between clean and aggressive tones. You could hear Meshuggah, Devin Townsend, Tool, and hundreds of other inspirations synthesized into their own math metal compound. I believe with “Silhouettes”, their third album, they finally locked into the right combination of technique with finesse, understanding that great compositions need to have room to breathe. So it shouldn’t be surprising to most that the 11 song “Dualism” refines this concept a little more – especially with the impact of their newest singer Daniel de Jongh and to a lesser extent their latest keyboard recruit Uri Dijk.

The opening song “Arms Of The Sea” lulls you into the record with these atmospheric guitar tones as Stef Broks tumbles away these Tool-like drum movements. A minute later you get to understand the subtle brilliance of Textures as they push and pull at your brain matter, swaying the arrangement to and fro between Daniel’s acidic screams and distinct clean melodies, the choppy, off-time rhythms and then producing these new age jazz guitar lines that just add the right bright light to the song. The follow up “Black Horses Stampede” focuses more on heavy, hypnotic grooves, the dual guitar team of Bart Hennephof and Jochem Jacobs intertwining beautifully and yet also willing to fill the sound with their own individual chords and need for sonic build ups to really hone in on the emotional impact.

“Reaching Home” could be the best Textures track ever – and possibly a song that could open them up to a wider, more commercially oriented audience without sacrificing who they are as a band. Containing one of those instantly recognizable guitar riffs that you can walk away humming for days on end, Daniel gets a chance to flex his multi-octave range with progressive flair – the voice softer during the verses and then reaching for the collective stars during the chorus and beyond. Every track just has that something special I seek in bands – the willingness to be distinct, to push boundaries, to challenge the soul and spirit, to move inside of you and make something better because of each listen. Other highlights include the off-time madness that is “Minor Earth, Major Skies” and the alternative sounding closer “Sketches From A Motionless Statue” where the guitar play and drums appear to be in a sudden speed skating race to the heavens.

Textures continue to be forerunners in a movement that along with Periphery appears to be gaining huge momentum in all parts of the world. They know what metal is and are aware of the fact that the cover art will be viewed with confusion and skepticism from outsiders. There’s an underlying sense of confidence without cockiness regarding this sextet – as they want to make music that can be appreciated years down the line. “Dualism” proves you can be complex without becoming overindulgent – that in the end its all about retainable, tangible songwriting and Textures deliver in spades for their career defining pinnacle achievement.

And why isn’t this a perfect score? Because I believe Textures will improve even more…