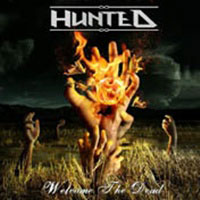 Thanks to festival action like Download and Bloodstock, multiple forms of metal are infiltrating the current UK scene and as a result we have a logical progression of younger bands climbing their way up the ranks. Based in Cardiff, Wales, the five piece Hunted began their career covering many of their heroes from the 80’s and 90’s scene. After critical acclaim across mainland Europe in 2009 for their demo EP “Alone” as well as self-releasing this album originally in 2010, Massacre Records scoops up this traditional metal act with progressive and thrash elements for a more broad base 10 track effort.

Upon initial exposure to “The Silence Of Minds” and “Impaled” among others, you can’t help but notice the ear piercing melodic/progressive range of vocalist Chris G. Combining the personality of a Carl Albert with the intense lung capacity of a Geoff Tate or Bobby Lucas (ex-Seven Witches, Overlorde), he’ll certainly impress a lot of fans and possibly irritate others as he does have a tendency to maybe showboat and sacrifice the arrangement at times. The other four musicians aren’t slouches either – as the guitarists wield riffs, harmonies and solos around a Blind Guardian meets Iron Maiden/Iced Earth-like foundation and the Jonathan Letson-Matthew Thomas bass/drum duo pump up the tempos with a lot of nifty thrash and progressive dynamics. “Scars” for instance will be straightforward in one measure, then slip into dissonant, finger tapping moments where the bass, drums and guitars all charge with power/thrash abandon.

There are plenty of songs where I’m sure the audience will be able to windmill their hair or induce the correct chant to scream correlations – personal favorites including “I Want Nothing” and the 8:49 epic “Aria (In Memoriam)”. Closing with a bonus cover of Nevermore’s “The Heart Collector” that is serviceable at best (the keyboard parts weaken this normally heavy ballad), “Welcome The Dead” is a great start for Hunted, and I can see this going over quite well in most traditional countries.