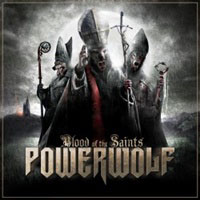 POWERWOLF – Blood Of The Saints

Dark, epic power metal gains little fanfare in my native North American landscape. I struggle to understand why, as Powerwolf possess much of what I desire and have long been into for my heavy tastes – emotionally charged vocals with a classical, traditional base, guitars that deliver jaw dropping hook riffs and solos that sometimes double up to thicken the harmonies and a rhythm section certain to keep the arrangements equally on pace. Using five different studios and a church for many of the choir/ organ parts, this fourth album showcases this German/Romanian five piece no longer hoping to make an impression on the scene – but rather asserting itself as one of the premiere power metal acts from the world.

You can hear the quieter, Iron Maiden-like build ups in the instrumental transitions of “Night Of The Werewolves”, then move into faster terrain with larger than life choir vocals (a la Sabaton) for the follow up “Phantom Of The Funeral” which I’m sure will go down a storm in future live shows. Keyboardist/organist Falk Maria Schlegel reinforces this old school church feel with his darker, natural sounds in tracks like “Die, Die Crucified” and “We Drink Your Blood”. Vocalist Attila Dorn has a one of a kind delivery – the way he holds out certain notes comes from a Messiah Marcolin approach but with a natural ability to sing with a neo-classical operatic meets traditional multi-octave strength. His best vocals come on the up tempo “Murder At Midnight” that features some Accept-like twin guitar harmonies and the dramatic “Dead Boys Don’t Cry” which opens like a war march but quickly mutates into a fine European power metal effort.

If you seek out clips of the band live, you’ll notice that this is one of the rare acts who are equally impressive on stage as they are on record. “Blood Of The Saints” is a natural extension of the previous three albums, so if you’ve always been into Powerwolf I know this one won’t disappoint. And if you desire something different in your traditional power metal, this band assuredly will change your thoughts on the genre.