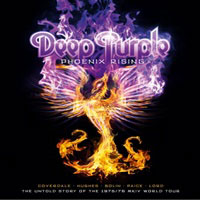 No one can deny the influence of Deep Purple on the music scene. “Smoke On The Water” contains the most recognizable riff in the history of rock. Think of all the great vocalists. Jon Lord’s insane keyboard and organ escapades. “Phoenix Rising” captures the live aspect of the final Mark IV lineup in 1975 when Ritchie Blackmore flew the coop to start Rainbow and the core of Coverdale, Hughes, Paice, and Lord recruited an American guitarist Tommy Bolin to record “Come Taste The Band”.

Digitally remastered and recorded in Longbeach, California and Japan, the 8 songs that make up the audio disc run across all aspects of the band – from immediate up tempo bashers like “Burn” to the classic “Smoke On The Water”, ending with “Stormbringer”. You always know with Deep Purple what you hear live will be slightly different than on studio, as the musicianship allows for extended jamming and solo sessions from Lord and Bolin. David Coverdale and Glenn Hughes made the best one-two vocal punch hard rock had ever heard, and possibly will ever hear in history.

The DVD contains 5 songs from the Japan 1975 show at the Budokan Hall – including “Highway Star” that doesn’t appear on the audio disc. The band was really firing on all cylinders, exuding much more energy in their playing and stage performances. The 80 minute interview with Jon Lord and Glenn Hughes takes you through the lineup changes of Ian Gillian and Roger Glover leaving, the subsequent hiring of Hughes and Coverdale, plus the last 3 studio albums and major live touring. The talk is spread out with lots of live footage so you really feel like you are back in those incredibly creative days of Deep Purple. Years of stories, a true sex, drugs and rock ‘n roll legacy for a band playing to tens of thousands every night.

Loads of pictures, great liner notes – if you are going to pull together something like this, Deep Purple did it the right way with all the high class and professionalism you’d expect. May not beat the Ian Gillian years of the band, but you can’t deny the talent of these five musicians.