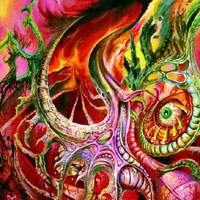 MORBUS CHRON – Sleepers In The Rift

From Kungsängen/Stockholm, Sweden hails Morbus Chron. The band, which got together only in 2007, consists of four angry youngsters and they’ve just released their debut album, "Sleepers In The Rift" on Pulverised Records. Their style is quite close to what Death sounded like in the "Leprosy" era, with a bit of Autopsy-ish doom elements. But it still has Morbus Chron’s distinct sound which sets them apart from the others. The record has been produced by Nicke Andersson who really gave it the touch it needed – it has a definite old-school and raw sound, and it really sounds more like a 1988 release. Although it’s filled with old influences it’s a fresh breath in the world of modern death metal-bands.

"Sleepers…" is filled with fast hooks, angry vocals, infuriated harmonies and at times mesmerizing parts such as the end of "The Hallucinating Dead". The impression melodies like that creates goes together flawless with the twisting effects used here and there on the record and the psychedelic album cover (made by Raul Gonzales). They clearly follow the philosophy that a great riff is not to be overused, as heard in the second song "Creepy Creeping Creep" which ends with the introduction to a completely new riff to the song. 18 seconds of awesomeness before it ends. Where other bands might have a based a whole song on that riff idea they merely acknowledge its existence and ends it just after it has barely started, leaving you begging for more.

There really isn’t one single weak spot on the album, it is packed with fast riffs, tempo changes, lots of bass and crushing vocals, all topped with a gut-wrenching production. Everything you want in a great death metal record. The only thing I can put my finger on is that it seems to be over too soon, which stems from that it keeps me pinned down, ingesting it all without ever losing my interest, which again is a positive thing.

I am really looking forward to more material from these guys, and from the sound and looks of it, it seems like they have barely started.