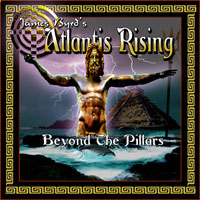 Right up there with Liege Lord during the “Master Control” era and Riot with Tony Moore for “Thundersteel”, Washington’s Fifth Angel with their self-titled debut album really shaped my power metal ears for the better. Ted Pilot’s piercing vocals and the dual axe action from James Byrd and Ed Archer peeling off classics like “In The Fallout” and their namesake “Fifth Angel” – it’s an album that 25 years beyond initial release still stands mountains above other albums critics and fans consider essential. After James’ dismissal, he would write material and record a series of solo albums (both vocal and instrumental) and some songs originally intended for the second Fifth Angel album see the light of day with this “Beyond The Pillars” release.

Fifth Angel alumnus Ken Mary would play drums on this record, and vocalist Freddy Krumins certainly had one of those trained from the heaven’s golden voices, much in the Queensryche/Heir Apparent mold. Some of the songs like “After The Fire” and “Gotta Find You” place as much emphasis on keyboards as the guitar, proving that James Byrd wasn’t necessarily all about the neo-classical shred ethic even in that 80’s burgeoning landscape. Other songs like “Fallen Warrior” and “Fly To The Sun” would have easily been ideal on the second Fifth Angel record – guitar hero arrangements with soaring melodies and a rock steady rhythm backbone. James Byrd himself tailors his solos with the best mentors in mind: a little Ritchie Blackmore here, a touch Michael Schenker there, remembering that feeling is as important as any speed clinics you display.

These are raw songs in their mid 80’s form – so “Beyond The Pillars” is not one of those re-recordings for modern production sake. Nevertheless, James Byrd’s Atlantis Rising kept the essence of Fifth Angel in the forefront on this album, and as such is a diamond from the archives.