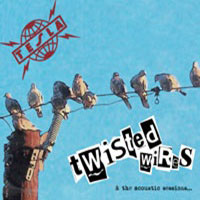 This American hard rock institution haven’t lost any appeal from their out of the gate 80’s success to their current stretch of studio recordings and sold out tours. So I’m not surprised to see a follow up to 1990’s blockbuster “Five Man Acoustical Jam”, this time put together with 2 separate studio sojourns – 6 songs recorded at Brian Wheat’s studio in 2005 and representing the final Tesla recordings with former guitarist Tommy Skeoch and 6 new recordings including two brand new songs “Second Street” and “Better Off Without You”.

Making the best out of a fire that destroyed most of the work on their next studio record, I’d like to delve into the two new songs first. “Second Street” is a half acoustic/half electric ballad with Jeff Keith’s bluesy vocal comfort winning you over from the start – almost resembling the best emotional cuts from “Psychotic Supper” or the highly underrated “Bust A Nut”. “Better Off Without You” would be the infamous track bassist Brian Wheat set off a slight controversy about with his tongue in cheek comments on VH1 Classic’s That Metal Show regarding Guns ‘N Roses stealing the main riff to for their hit song “Patience”. Albeit similar, the second half of the song takes on a 70’s southern rock appeal with its slide guitar and easy going charm.

The other tracks are acoustic interpretations of better known Tesla originals – the best of the bunch being “Hang Tough” complete with some spider web soloing, one of my favorites from their debut “Mechanical Resonance” album, “Changes” and the closing tribute to Steve Clark, “Song And Emotion”. There are many bands that you can tell really enjoy each other’s company, have a great vision for their music and execute to the highest degree possible – and I include Tesla near the top for the hard rock genre.

Some bands age gracefully like fine wine, and others fail to know when to bow out tactfully. In Tesla’s case, this journalist hopes their retirement doesn’t appear on the horizon for at least another 10-15 years – as they can teach more generations what real music and productive songwriting is all about.

WINDBRUCH – Collision Of The Worlds