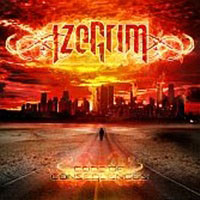 Decades ago, metal seemed an impervious club for females to move into as musicians. Especially in the thrash, death and black genres, where extremes are more prevalent. I would think based on musicians like Angela Gassow of Arch Enemy or in earlier days Leather Leone or Doro Pesch the world has come to realize that you don’t need testosterone to deliver the spirit of metal. Dutch thrash/death act Izegrim have had many females in their lineup through the years – starting in 1997 with a keyboardist, vocalist and bass player and continuing today with Marloes who handles bass and lead vocals on this newest “Code Of Consequences” album. Where will these 10 songs stack up against the current crop of bands?

Well, if anything Izegrim has one of the most unique monikers coming down the pike for thrash and death metal. Pluses on my first few playbacks include the obvious schooled arpeggio shred ability from twin guitarists Bart and Jeroen and the equally ear-grabbing throat abuse hurled by Marloes – it’s assuredly in the menacing growl category and sure to scare a few people away. Songs like “Psychopathic Mind” and “My Secret Society” have this drop on a dime militant tightness that keeps bands like Heathen, Paradox and Arch Enemy at the forefront of my mind. “Center Of Momentum” resonates as well with an old school Destruction buzz saw guitar motif, the slower parts conducive to maximum pit damage.

I even liked the dual back and forth vocals Marloes uses during the verses within “Final Farewell”, setting the stage as the rhythms fluctuate between speed bursts and more conventional mid-tempo head banging action. Izegrim stepped up their game the most in the production values, as the tones are much heavier and fuller than their previous two albums which significantly improves the overall package.

While there are times I hope for the vocals to belt out the odd clean passage, it’s a minor qualm for an otherwise very good thrash album with death tendencies.