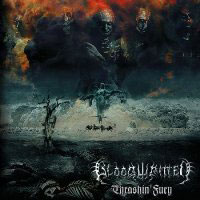 Polish thrashers Bloodwritten started out a little over a decade ago as a black metal act, but quickly moved on to more of a thrash metal sound, with "Thrashin’ Fury" standing strongly in the modern thrash camp. I find most modern thrash acts disappointing for two reasons. Firstly, some of them come across as mere copyists, basing themselves on philosophies like ‘Let’s sound like Baloff-era Exodus’ or ‘Let’s be DRI for the new millenium’. The second reason is that the songs aren’t strong enough.

Bloodwritten have thankfully avoided both of these pitfalls to produce an album that is clearly in the thrash camp, while not having any particular influence that you can put your finger on. If anything, you can see that the sound comes from Germanic acts like Kreator, Sodom and Destruction, with the influence of Bloodwritten’s black metal past coming through to increase the energy and intensity, especially in some of the vocals and drumming.

Those who are already familiar with Bloodwritten’s music should note that this album contains three tracks from the "Whore" EP; "Whore", "Bullet Overdose" and "Return to Tortuga Bay". Those who haven’t heard the band before are recommended to check this release out if they want an accessible and highly enjoyable slice of modern thrash. Ultimately, it is difficult to give a high score to a band who are writing in a genre that peaked 25 years ago, but this is one of the most convincing contemporary thrash albums I’ve heard.