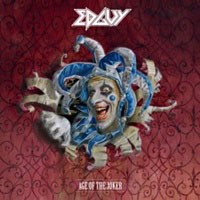 EDGUY – Age Of The Joker

Germany’s Edguy have transformed themselves from a potent Helloween-styled power metal band that struck a chord worldwide as early teenagers into a veteran band able to sustain chart entries, sold out tours across the globe and debate about their stylistic shifts in the course of the last three studio albums. It’s an age old bull session in metal – should a band grow as they feel accustomed or remain in this pocket for fear of fan abandonment? Some want Edguy to consistently churn out the up tempo, double bass material with Tobias’ piercing Kiske-like vocals and dual guitar harmonies that made “Vain Glory Opera” and “Theater Of Salvation” bigger sellers. Others embrace the simpler rhythms and more hard rock songwriting ethics employed on “Hellfire Club” and “Rocket Ride”.

Where does that place the quintet on their ninth studio album? Would they succumb to listener expectation or do they draw from within and continue to trust their own musical instinct and knowledge? I’m firmly of the belief that vocalist Tobias Sammet and the other gentlemen in Edguy aren’t in the business of disappointment – and there’s plenty to sink your teeth into on “Age Of The Joker” from power metal to traditional hard rock to even some outside cultural/mystical influences. You’ll for instance get a sense of the Irish Gary Moore “Over The Hills..” motif in the 6 minute, 18 second “Rock Of Cashel” through the guitar riffs and middle instrumental section, one of the future classics that I’m sure will gain rousing audience response for live shows. The follow up pseudo-ballad “Pandora’s Box” contains some spaghetti western acoustic guitar and you almost feel like you are taken back to the wild western cowboys and villains era while Tobias let’s out some Steven Tyler-esque ‘ya ya’ screams for dramatic effect.

Those who think the dual harmonies and flashy power tricks are over need to look at “Breathe” and the Deep Purple flourishes throughout “The Arcane Guild” to know that they still can keep the rhythms and tempos pumping even in their 30’s. Edguy seem to be exploring more of the dramatic, atmospheric dynamics of their sound, remindful of the Iron Maiden epics in the quiet mid-section of opener “Robin Hood” and the heavy to quiet transitions within “Behind The Gates To Midnight World”. No complaints on the sound, the versatility of the arrangements and performances- there’s plenty to take in over 11 songs and 65 minutes of sonic action.

I respect Edguy for launching from a power pad and ascending to arena level heights in many parts of the world on their own terms. “Age Of The Joker” should appeal to both camps of aforementioned followers as they are one of the elite bands in the worldwide metal scope.