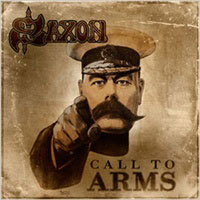 After 33+ years in the metal recording business, British veterans Saxon are one of the rare bands who I believe continually strive for higher quality songwriting as they get older. It’s not about putting out a new record every 6-9 months as the early 80’s – as Saxon put on their fair share of tours and festival gigs to keep them circulating all across the globe. “Call To Arms” represents a throwback of sorts – with many songs harkening back to classic “Perfect Strangers” Deep Purple era such as “When Doomsday Comes (Hybrid Theory)” or just the early “Denim and Leather”/“Strong Arm Of The Law” rocking moments with “Back in ’79”.

Opener “Hammer Of The Gods” represents one of their most up tempo album starters in quite a few years – with no introduction, guitarists Doug Scarrat and Paul Quinn lead the charge with their superb metal acumen and we even gain the bass note highlights from Nibbs Carter. Other material just has more of a conventional, traditional feel with loads of harmonic sensibilities – such as the immediacy of “Mists Of Avalon” or the double bass highway charge from “Afterburner”.

At 60 years young, Biff Byford still screams, shouts and salutes with the best international metal singers in the business – playful in personality for the more rocking “Surviving Against The Odds” and very bluesy and commanding for the more Thin Lizzy-esque send up “Ballad Of The Working Man”. The quintet just appear to be relishing their appreciation for hard rock and metal in general, as well as the positive reception they receive whenever they play out in the world- and as a result this nineteenth studio record is lean, mean and ready for the stage.

This is one of those rare instances where Saxon does not achieve perfection because I felt the album was too short (39 minutes if you discount the orchestral version of “Call To Arms”) – as I think another song or two would have really put this in the pinnacle of all time Saxon records – possibly eclipsing “Power & The Glory”. Who knows how many more studio albums and years we have left in the Saxon lifeline – but in 2011, the motorcycle men are still leading the pack and the younger generation have plenty to soak in from this amazing outfit.

HUMAN ZOO – Eyes Of The Stranger