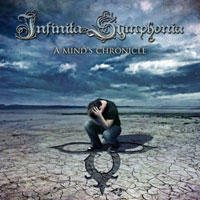 Guess we are grasping at straws for cool band names these days. Infinita Symphonia display a love for symphonic power metal with occasional nods to traditional or progressive fare. Guests on this debut album “A Mind’s Chronicle” include Tim ‘Ripper’ Owens and Fabio Lione, and overall these 10 tracks (plus “Intro (verted)” the introduction) are another steady example of the seemingly infinite Italian talent pool. Songs like “I Believe In You” and “Planet Universe” put out all of the guitar harmonies, speed tricks and high pitched vocals plus bells and whistles to impress the listener from the get go.

Bands like Eldritch, Labyrinth and possibly Germany’s Mob Rules come to mind when I listen to their melting pot sound – where sometimes the orchestration adds the necessary emotional depth to carry the conventional electric instrumentation as in personal dramatic favorite “Lost And Found”. Luca Micioni resides in a middle to upper register range, obviously receiving some vocal training through the years as he knows how to reach up the note scale and when to hold back- both prominent in “The Equation Of The End”.  Lead guitarist Gianmarco Ricasoli unfurls a heavier, neo-classical meets progressive attack throughout, giving “Lost In My Own Brain” the energy and excitement necessary to lift Infinita Symphonia to buzz worthy status.

I’ll admit that on first listen “A Mind’s Chronicle” didn’t strike my fancy. This is not a paint by numbers songwriting effort – you’ll get plenty of ebb and flow within the lyrics, the performances, the sudden bursts of bombast and the turn on a dime reflective quietness. Those who live for albums with a long shelf life should break the piggy banks wide open over Infinita Symphonia.