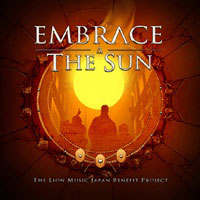 Lion Music has always been renown for their guitar hero exposure in terms of instrumental and group situations. So it’s little surprise where many of these artists gain acclaim in the Far East that they would pay it forward to help after the natural disasters crippled Japan earlier this year. As a result we have another double album with 28 songs by 28 Lion Music artists – most of which supplied exclusive tracks for this collection. In fact 4 of the bands (Ashent, Astra, Iron Mask, and Venturia) feature debut recordings with their newest band lineups (all with new vocalists, Venturia and Iron Mask doubling up the changes with new drummers).

The closing track by The Lions is a 5:31 instrumental shred Olympics with no less than 8 guitarists on the roster blazing their fingers and talent in a title cut that will certainly warm the hearts of all who love technical knowledge and application. Many of the artists searched within to deliver material deep from their hearts, often going for more of a mid tempo or ballad-like approach such as Anthriel with “Circle Of Life” or Ashent with “Disappearance”. Do not fear, there’s plenty of up tempo, Rainbow-inspired action from an act like Locomotive Breath with “Get Up (Perspective Of The Common Man)” and progressive metal mastery on disc 2 from Section A and Astra with their contributions. You even get a domestic contribution with one of Lion Music’s latest signings, progressive rock band Early Cross who’s “Cairn” spans the gamut from acoustic strumming to almost ethereal gothic leanings as the female vocals give this a strong The Gathering appeal.

All of the artists have agreed to donate their profits to the Japanese Red Cross and this project is done with the right intent. The listeners gain by hearing fresh material that probably will remain exclusive to this double record. The bands get the chance to contribute by delivering their songwriting talent and performances to a country who has always revered the movements of progressive, power and neo-classical metal. Putting together this effort within a 90 day span and keeping the quality on high is also noteworthy. “Embrace The Sun -The Lion Music Japan Benefit Project” should give you proper insight into the modern guitar hero abilities of the label’s roster around the world.