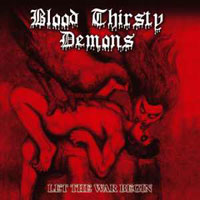 In 2010 Italian ‘horror’ metal band Blood Thirsty Demons released their fourth studio album “Misanthropy”; simultaneously they released a re-issue of their 2005 effort “Let The War Begin”, adding on two bonus tracks as extra incentive. Without any knowledge of the quality of the original album, and thereby no knowledge about what is different between “Let The War Begin” 2005 and 2010 (apart from the two bonus tracks), one might summarize the 2010 version as a bad Hollywood remake of a movie that might not have needed a remake to begin with.

The album ‘kicks’ off with a dark, ominous track by the name of “The Awakening”, a one minute mood setter for the next 50 minutes. With the mood all set the album attempts to delve into a continuous mixture of catchy sing a long stadium metal in the area of Iron Maiden while trying to add on brutality and speed putting them alongside metal giants such as Metallica and Slayer. They fail quite atrociously on both counts. The album lacks consistency and structure, the tracks moves in an unravelling pattern making it very difficult to just sit back and enjoy “Let The War Begin”.  “I Am The Evil” offers the perfect example of how not to make a metal song. With a second vocal track next to the screeching Cristian Mustaine and a fairly calm opening, moving into fast paced metal later on, the track sounds like the inbred bastard child of Immortal and Megadeth.

Blood Thirsty Demons display a desire to be great. Their influences are clear to any listener with a basic knowledge of metal, and while the majority of the album is mostly a string of badly structured offerings to the metal legacy, one track stands out in a positive way. “This Is My Death” works as one of two highlights of the 12 track compilation, with steady riffs, a well thought out structure and well fitted vocals. The song is worthy of some adulation. “Burn The Witches” has a good riff and just like the preceding track it seems oddly thought out compared to the opening tracks. Again the bands gets in their own way by adding sections that destroys the overall impression of the song. Not fully worthy of a ‘highlight’ label but surely worth looking into if you’ve already spent the money for “Let The War Begin”.

All in all “Let The War Begin” is worth listening to once if you have already acquired the album, maybe some repeat listens of “This Is My Death”, “Burn The Witches” and “…All Is Black”. With some more consistent structure and a clear musical direction Blood Thirsty Demons has the potential of offering the metal world good albums. “Let The War Begin” on the other hand will forever go into history as a ‘nice try but no cigar’ for the Italian metal band.

UNEARTH – Darkness In The Light