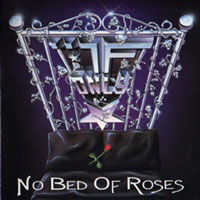 IF ONLY – No Bed Of Roses

A re-release of this UK AOR album from 1992, a tribute of sorts to vocalist Tina Egan who passed away in 1999. “.No Bed Of Roses” features the original 12 song album plus 5 bonus tracks, 4 of which feature ex-Girlschool vocalist Jackie Bodimead who left the band at the eleventh hour before recording this debut record. Produced by Asia’s Geoff Downes, songs such as “I’m No Angel” and “Loaded Gun” split between standard American style AOR with huge, multi-part harmonies in the choruses and occasional references into blues based Tesla territory. Tina spits fire with her fierce, passionate delivery, her best work coming in on the higher energy tracks like “Ghost On You” or the talk box driven “Tumblin’ Dice”.

Of the Jackie material, “All Over” is more of a straight ahead number, while “Stand Like A Stone” could have easily appeared on any of those Karate Kid type 80’s movie soundtracks. Overall, “No Bed Of Roses” doesn’t elevate my heart rate as it’s very paint by numbers in its approach and execution. When I want to hear female fronted AOR or melodic hard rock, Heart are the pioneers and I’m hard pressed to find much in If Only that comes close to the Ann/ Nancy Wilson vocal tour de force.

I realize now seems to be a resurrection of long lost classics – but “No Bed Of Roses” should only be sought out by the absolute have to have it all If Only follower.