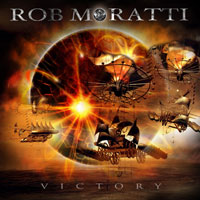 As quickly as Canadian singer Rob Moratti slid into the progressive rock band Saga for “The Human Condition” album in 2009, he would exit almost as quickly as original front man Michael Sadler had a change of retirement plan. Using this new found popularity to his best advantage, Rob assembles an impressive stable of musicians with guitarist Reb Beach, bassist Tony Franklin and fellow Saga drummer Brian Doerner amongst others for “Victory” – proving that the man’s soaring pipes are a gift to the melodic hard rock fans worldwide that should never fly under the radar again.

The emphasis on “Victory” appears to be showcasing all facets of Rob’s recording career – with some of the material having a little more of that progressive rock charge like the keyboard friendly opener “Life On The Line”, “Hold That Light” and “Standing On The Top Of The World”  and other songs going for the 80’s inspired AOR meets melodic hard rock scene such as obvious harmony laden (both in the twin guitar lines and the huge chorus) “Everything But Good Bye” and Survivor-ish “Power Of Love”. Those of you who are looking for some tasty solos, Reb Beach and Christian Wolff deliver in spades on these 11 songs- keeping with the energy of Rob’s incredible multi-octave range and also using restraint and respect on the softer ballad “Take It All Back”. “I Promise You” even has a little bit of that Little River Band cadence with the warm chorus and clean acoustics against the conventional electric backdrop.

I’m sure if Journey ever needs another singer to handle Steve Perry’s falsetto, Rob Moratti would be more than adequate to accept the role. In the meantime, he’s doing just fine fronting his own solo effort – and I for one hope this will be a continuous recording lineup for at least a few more albums. Great songwriting, killer musicianship, high caliber melodies – “Victory” shines like a bright diamond. You miss Toto or Survivor with a touch more bite? Essential.

NECROVOROUS – Funeral For The Insane