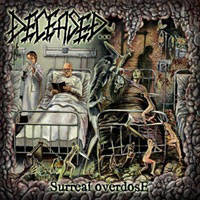 Six years since their last studio release doesn’t mean this Virginia death/thrash band have been idling their minutes away twiddling thumbs. Jumping back onto his drum kit, vocalist King Fowley is living proof of the eternal power of heavy metal. Joining him on “Surreal Overdose” is longtime bassist Les Snyder, studio guitarist Mike Smith and longtime live guitarist Shane Fuegel – and don’t you ever think that as these men advance in their years that they’ve lost sight of what Deceased represents: unyielding, non-conforming metal built for speed, energy and pure entertainment.

In terms of comparison to the Deceased discography through the years, “Surreal Overdose” probably is the most full throttle record since 1995’s “The Blueprints For Madness” yet with the melody and harmonic expertise of “Fearless Undead Machines”. The relentless riff parade and King’s hyper-kinetic snare to bass play within “Kindred Assembly” will strain many a neck as well as vocal chords from screaming in delight at this track. Some of the old school punk horror homage comes in during the beginning strains of “The Traumatic” – while the bulk of the arrangement switches between speed passages and frenzied, melodic cultural soloing. “Cloned” opens with a twin guitar line close to “The Ripper” from Judas Priest while the bulk of the song carries an eerie, early death metal meets classic 80’s Maiden feel – the soundtrack sampling signaling a fierce, angry quartet out for blood. My favorite song “In The Laboratory Of Joyous Gloom” features King’s best drum performance on the album, channeling his decades of ability as the epic 6:54 cut weaves and bobs from fast paced to more control and layered harmonies from the Smith/ Fuegel tandem.

It’s not easy to capture Deceased’s live onslaught onto a studio record. This is very close though – and as a result possibly the best set of songs in their lifetime. Join the Deceased cult – discover metal from musicians who laugh at commercial aspirations or creative compromise. Let your inner insanity reign!