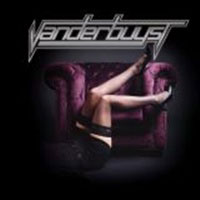 Ex-Powervice guitarist Willem Verbuyst formed this power trio with bassist /vocalist Jochem Jonkman and drummer Barry Van Esbroek in 2008 – and Vanderbuyst have been impressing audiences in Belgium, Germany and their native The Netherlands and will soon be supporting Saxon on a full European tour. It’s easy to hear on my first (and tenth) listen to this 7 song debut album that this band appeal to the classic 70’s hard rock follower – the one who wants a guitarist that rips things up with a Michael Schenker/ Gary Moore like intensity, a bassist and drummer that also excite and delight, dancing around the basic arrangements with a sense of jam energy.

How can you not love a song that’s an ode to one of their favorite 80’s porn stars “Traci Lords”? Or a live in the studio rendition of the UFO classic “Rock Bottom”? “Stealing Your Thunder” opens with a riff straight from the Scorpions “Blackout” school of hard rock before mutating into a steady bluesy charge not dissimilar to their UK influences – containing probably the most accessible hooks in the chorus as well. My favorite song “Tiger” has those Les Paul squeals and quirks that seem to be prevalent in a lot of Scandinavian traditional metal groups – along with a smooth sense of serenity in the background vocals.

Vanderbuyst stand out in a scene of cross pollination and genre chasing in the only way they know how – by staying true to their ideals and their love for old school hard rock. If you can’t catch what they are doing- that’s fine. Thousands of others certainly are, and will continue to through the hot months of summer festival action. Deep Purple, UFO, Thin Lizzy, The Scorpions – if those 4 bands rate high in your collection, this one is a no-brainer to add.