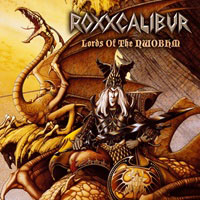 ROXXCALIBUR – Lords Of The NWOBHM

You want an education on the fascination with the New Wave Of British Heavy Metal era? Welcome back then to German act Roxxcalibur – featuring members of Viron, Into The Abyss and Abandoned, journeying into the 80’s independent scene with this 14 song sophomore effort. Long time aficionado Neudi Neuderth picks out a mixture of better known as well as truly obscure material (a b-side from More called “Atomic Rock”, an unfinished Saxon song “Lift Up Your Eyes”) and keeps the spirit of the 80’s alive with live tracking and refusing to use modern technology like Cubase or Pro Tools even in the mixing of the album.

Tygers Of Pan Tang, Quartz, Satan, Witchfynde, and Tokyo Blade all get equal placement on “Lords Of The NWOBHM” – as well as rarities from lesser known bands such as Hollow Ground, Cryer, Oxym, and Blood Money. “Atomic Rock” springs forth like a more energetic Dio-led Rainbow, while “Heads Will Roll” recalls the beauty of twin Maiden-dom. “Day To Day” is one of those mid-tempo anthems punctuated by Alexx Stahl’s potent sustainable high range. “Hellbound” shows where Maiden may have nicked a riff or two from Tygers Of Pan Tang for their “Powerslave” single “2 Minutes To Midnight” and “Stagefright” takes Sabbath level doom to another haunting experience. Ending with “At War With Satan (preview)” from the mighty Venom shows Roxxcalibur go up and down the traditional, power and speed spectrum with their love for the genre.

If you want a time capsule resurrected for the current metal follower to understand what was so special about the movement, Roxxcalibur and “Lords Of The NWOBHM” is essential. You may want to pick up the limited edition that contains a bonus DVD with live performances and behind the scenes footage with producer Chris Tsangarides. Raise your fist high – head bang until you die!

SEVEN WITCHES – Call Upon The Wicked