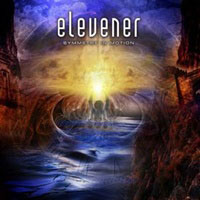 With a break in the action following Elevener’s impact of 2008’s “When Kaleidoscopes Collide” debut album, guitarist Magnus Lindqvist came into the fold in 2010 to replace guitarist/drummer Andreas Broden. Soon filling out the new Elevener lineup would be drummer Anton Roos, bassist Robert Garnold and vocalist Pierre Wensberg – and we finally have the realization of the follow up in “Symmetry In Motion”. Concern creeps into this reviewer’s brain when there are too many moving parts from a previous record, but I’ll always give acts the benefit of the doubt as I put the record on.

Elevener excel at giving the listener all tempo facets from ballads like “Dare To Love” and “For The Times We Share” to mid-tempo AOR numbers like “Just As I Thought” or “Cage Of Broken Dreams” on through to the high energy, melodic hard rock efforts like “Never Would I” or “Modern Times”. The production values are crystal clear, the melodies from Pierre of a high class caliber and while I wouldn’t consider what Elevener are doing revolutionary (what could be from AOR at this point in its lifespan) they certainly know how to put together stirring compositions and hooks that stay in the cranium for a lifetime. Magnus Lindqvist throws down a boatload of tasteful guitar licks and solos much like the better Neal Schon movements of Journey and Bad English through the years.

Pierre’s voice has more of an airy, higher quality than keyboardist Johan’s from the debut – which I think took me a few listens to gain comfort in. It’s like comparing Steve Perry to Brad Delp or Lou Gramm – all of which have incredibly memorable ranges yet different strengths and tones to their voices. My favorites include the gospel-like organ parts that fuel “Heal Me” and the aforementioned higher tempo “Never Would I”, hopefully a permanent part of the Elevener set list.

Two for two in the Elevener discography for me – let’s hope this lineup gets a chance to stay together for a while and ascend the ranks in the melodic hard rock/ AOR genre.