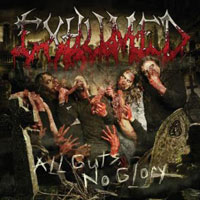 EXHUMED – All Guts, No Glory

A break of 7 years has only done good for U.S. death metal band Exhumed. Nothing wrong with what they have done before, which is mostly just awesome.

On "All Guts, No Glory" the band ravage wildly with their raw unpolished metal. There is hardly any other band today that has the same raw, unpolished and glorious death metal sound as Exhumed has on "All Guts, No Glory", and I thank Exhumed for that. Almost every record is mostly polished, overproduced and trigged today, but not Exhumed. That’s why I like them this much. Even better, they’re even better live.

"All Guts, No Glory" opens very well, but the album dies a little due to a couple of weaker songs in the first half where the pace is unusually weak to be Exhumed. It’s almost as they visit the dreadful non-existent genre of Swedish melodic death metal. It was almost like I gave Exhumed a sick leave on a first hearing, but halfway through they turn on full blast again and deliver as only they can. The little quieter break actually makes the second half even better than it actually is. Brilliant idea.

There are plenty of tempo changes on "All Guts, No Glory", the album pretty much rocks all the time and you simply want a beer while listening to the album. Extra kudos for fantastic raw vocals from Matt Harvey, sparkling drumming from Danny Walker and that the album is so unpolished and raw as it actually is. The saw is back.