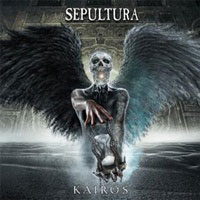 Back in my college years, I remember reading about this Brazilian thrash band who signed to Roadrunner Records and released “Beneath The Remains” – one of the quintessential records in my collection that showcased speed and ferocity while figuring out a way to roll with melody and song separation. A couple of years later I saw them on an arena tour opening for Helmet and Ministry in support of “Arise” – and in my eyes they were readying for the big leagues. “Chaos A.D.” came in just when metal in America was transitioning (1993) and Epic Records didn’t know how to push Sepultura beyond their 6 figure following in most of the world in terms of album sales.

“Roots” would be the dividing line for most Sepultura followers – the band really slowing things down, experimenting with more tribal beats and percussion plus a pronounced, bass heavy sound probably influenced by the big band of that era – Korn. Max Cavalera moved on to form Soulfly, eventually his brother Igor would leave the fold- and the newer albums with  American vocalist Derrick Green haven’t been as accepted by critics and fans alike in the late 90’s and 2000’s.

So now we come to “Kairos” – their twelfth album in a 25 year studio recording history for the foursome. Should the band return to their ‘roots, bloody roots’ and amaze with their speed/thrash skills like the early days? What if they take a nod to their touring history by roughening up Ministry’s “Just One Fix”? Overall the 12 main songs (supplemented by 3 interludes of less than 30 seconds each) just seem fixated on a mid-tempo heavy groove factor – even when guitarist Andreas Kisser turns up the picking factor for the close to death metal ending on “Mask” it feels like it takes forever to raise the pace. Derrick Green appears very comfortable in the Sepultura sound – mirroring what Max would offer on “Spectrum” and “Born Strong” – but it could be a case of too little too late in terms of resurrecting the legacy of the band.

“Kairos” attempts to fuse the drumming charge of “Chaos A.D.” with the rhythms and militant tuning on “Roots” – but ultimately fails to raise more than a cursory eyebrow because a great riff or there doesn’t maintain full interest on a 53 minute album. So put aside your previous disagreements Andreas and Paulo Jr. – a real Sepultura reunion would be in order as the newer generation needs to understand what all the original fuss about your music was in the first place.