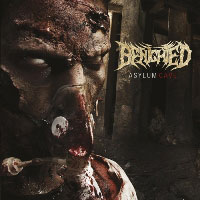 I guess it was just a matter of time before some shock rockers incorporated the Josef Fritzl incident into their repertoire. Still, the shock value could scarcely have found a better connoisseur to be expressed through than Benighted. The music is as frantic as the story itself and the political incorrectness exude in the musical landscape that is "Asylum Cave". The band really takes it all out, making a concept album on a kid being so consumed by the Fritzl story that he creates his own asylum cave.

I must say, that it is a feat unprecedented when a band with any affiliations to grind whatsoever manage to raise my attention. Usually I can’t stand grind of any kind, but Benighted’s mix of grind vocals, surgical precision like riffs/rhythms and a clinical yet dirty production has made me a believer… in grind that is. If trying to describe the style of this album I would say it’s a 70/30 mix of old school death metal and new school deathcore as far as the music goes. Then add the element of grind on the vocal front, and you get "Asylum Cave".

The melodic construction is closer to old school death metal as well, but the tempo is maintained at intense speed throughout the album, with the perfect amount of variation to not make it boring. My favorite track on the album is “Let the Blood Spill between my Broken Teeth”. This is insanity manifested in sonic form. It is dark, it is gritty and the cold feel of the album surpasses most “pseudo-evilness” I have heard from death metal bands in quite some years. If you appreciate death metal I don’t see how you can go wrong by acquiring "Asylum Cave". Without a doubt the strongest album with death metal affiliation so far in 2011.

THE BATALLION – Head Up High