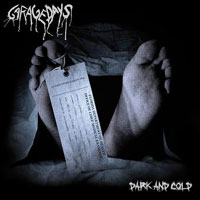 Love Metallica, much? Yep. They sound like Metallica folks, big shocker, I know. Not with that name, though, right. This is thrash metal. Enjoyable and forgettable at the same time. Funny thing, not only is “Last Breath” main riff directly “borrowed” from “Battery”, but the style is actually more in the vein of…”Death Magnetic”, which I like…in original version. The singer is actually more “talking” than singing, though. That is until he whips out that Tom Araya shriek from “Angel Of Death”.

If it is often said that bands wear their influences on their sleeve, these guys seem to wear them on their cocks. I do not get the menace that comes from the attitude of the lyrics to match the music. The songs are short and until “Father” lack any kind of variety. “Father” starts as a ballad in the vein of “Fade To Black” meets “Return To Serenity” (Testament for the uninitiated) with a little “Cemetery Gates” thrown in for a good measure. Then it’s back to the chugga – chugga of the first few tracks. The production is nasty but decent. Oh, Mercyful Fate in “Blown Away”. Whatever the fuck happened to originality, folks? Is metal excused because it is so easy to rip your brother in metal arms off?

These must be the worst thrash metal vocals I have ever heard. No wait, Exciter still takes the cake on that one. “Four” is a ballad and is quickly becoming the worst track on the album, as the acoustic mediocre riff is meandering into eternity with occasional solos underneath. I’m reminded of Stewie Griffin when his father tried to breast feed him.

“I’m Your Hate” doesn’t sound like “Sad But True” at all, it’s just my perception that sings “Hate, hate, I’m, your hate, I’m your hate when you want love…”. The next song might just be the perfect summary for this album, “Piece Of Shit”. Sometimes self – flagellation can be means to self – improvement so no complaints there. But why must I suffer through another mediocre ballad, “Conscience”? Next. Oh, cool base line, if a brief one.

Welcome, Megadeth, let’s see if we can get a direct quote on “Black Bridges”, other than the “Burning Bridges” reference. Is this supposed to be progressive? No Megadeth rip off. But it’s okay, we’ve got Machine Head’s “Imperium” in the title track. And now, ladies and gentlemen, Rob Halford with “Breaking The Law” is making a guest appearance. After all, imitation is the highest form of respect. Or flattery. I don’t remember.
Oh, the end? Why???

I want to give this 3 points but I can’t because I am too nice of a guy. So 2.5 it is. Now where is that “Delete” button on my keyboard? Now I know these guys will probably hire an assassin to go after my ass for this review so Roy please don’t give them my info no matter how much they water-board you. Thanks, you are a true friend. (of corpse – Roy)