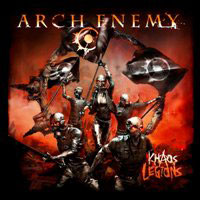 I am completely at a loss of a clue why this band gets so much hatred from the metal community. There are actually four camps: those who only like the band with John Liiva and think Angela Gossow fucked AE up, the lovers of the latter AE with Angela, thinking JL stuff is not so good, the ones who accept the band entirely (that would be yours truly, and yes, I have all AE albums, thank you very much) and those who always thought it to be substandard or not worthy of attention. Recently, Sputnikmusic and Metalstorm both slammed this new album as utter shit and high treason sell out. I personally think that people calling this band a sellout should go fuck their respective mothers, because Arch Enemy was and still is, pure fucking metal. And just you look at this fucking cover – it does not get any more metal than that! Sure, it may contain more melody, occasionally less extreme nature of say, “Black Earth” era, but this is a very diversified record with symphonic and even almost black metal elements, as well as lots of progressive touches. Essentially, this new album is top shelf death/thrash metal, with more emphasis on the thrash metal than they did in the past. And dip me in honey and throw me to the lesbians in hot action if this isn’t their finest hour!

Personally, I am amazed how these guys continue coming up with some of the greatest solos and melodies in the genre, to say nothing of originality. Though I love the new In Flames, “Khaos…” is better and more “old school”, though, contrary to clueless detractors who secretly hate heavy metal but are afraid to admit it, while calling Arch Enemy a “generic melodeath band” this album has a lot of experimentation with different sounds, pace, genres and even VOCALS. Yes, damn it, you read it right, hot as fuck Angela actually modified her voice trying to scream rather than growl all the time in “Through the Eyes of the Raven”. The growls are doubled with the screaming creating an unprecedented combination in AE’s history. This track is one of the most innovative and truly heavy death metal songs on the album, straddling thrash, death and even black metal elements.

Of special recognition deserves also  “Cruelty Without Beauty”, which features one of the coolest riffs in recent memory. If you don’t think so, you don’t like metal, period. Shit, the same applies to the whole album. What I love is how Michael plays the riff and slides up the scale of the guitar strings with a squeal not so different from “Skin of My Teeth” Megadeth (1992 "Countdown to Extinction"). Just like on that album, you can hear actual fun of making music in that one pick, something a lot of modern bands forget when in the studio. In fact, the song as strongly reminds me of “Countdown to Extinction” as does the whole album. Perhaps mostly because "CTE" was the first album that really hit me as a metal fan and left me addicted for a month spinning the fucker over and over with a “Metallica who?” grin on my face. As for “Cruelty” it has a very creepy violin/keyboard section in the chorus on top of a death metal riff, and the beginning buildup would not be out of place on “Rust in Peace”. Clearly touring with Dave Mustaine left an indelible mark. It sounds nothing like AE of the past, but haters gonna hate. Yes, "KL" is very fucking catchy like "CTE" and maybe that’s why people hate on it just like they did on the RIP follow-up.

But I couldn’t give two shits up Sarah Palin’s ass about the metalhead “truthers”. To me if it sounds good and I like it, I buy it. Besides, in between those very beautiful, epic melodies (“Thorns In My Flesh” (!) Arch Enemy does so much brutal thrashing that to call them sellouts is just plain stupid. Just listen to the absolutely death metal, and I mean DEATH metal without the emphasis on, though certainly not devoid of, melody, “Vengeance Is Mine”. That song just rips your balls off and feeds them to ya. I wish detractors would simply admit they just don’t like metal, anymore. Every time a veteran metal band releases a new album on the aforementioned websites, they bitch and moan or just simply relegate it to the gutter. Sputnikmusic is about all kinds of music so they could be excused, but Metalstorm needs to strike the word “metal” from their name, yes, I fucking went there. You may think me an asshole but the abominable new Morbid Angel got high praises on there so what does that tell you? I say all this because “Khaos Legions” is so good that I am actually not content with the 192 kbps MP3 version and I need to have the real thing, lyrics, cover and all NOW.

Just take two of these tracks, my favorites of the LP, which need to be heard by juvenile bands by the way of a lesson how to write kick ass catchy metal, and call me in the morning. First is “Under the Black Flag” with addictive chorus and stellar guitar work and second is “Bloodstained Cross” where Michael Amott simply turns into fucking Santana whilst soloing. Like Santana, Amott  just needs to be recognized as one of the greatest guitarists of all time, metal and beyond. His is one of the best solos I have ever heard, so emotional, so beautiful, so moving. And I like how Angela wrote a lyric about the disappointment with Christianity. There’s no anger, no hatred or self-righteous militant atheism (though it will surely rear its head on “No Gods No Masters”) here, only sadness and pity for those who believed in a promise of a man-made god (as I once naively did) who never returned and can save no one. It is a genuinely sad and emotional song and probably my favorite on the album. The chorus melody is just fantastic and so original. Plus Angela’s vocals are brutalized to sound like Chris Barnes in the chorus. But they sold out, all right.

It is so hard, it seems, for metal bands to consistently come up with fresh melody, but not for these guys. They seem to be shitting it out with a breakfast coffee along with scores of simple and not-so-simple, all fantastic, riffs. Arch Enemy is one of those immensely talented bands who did almost everything right in the past and absolutely everything right this year and deserves all the accolades for this stellar accomplishment. Every album is different and so is this one. I love them all from “Black Earth” to this one, but on this one they pulled their best ideas and talents for a truly magnificent magnum opus.

Much like Depeche Mode left Alan Wilder in the dust with “Playing the Angel” and Megadeth outclassed Metallica with “Endgame”, all due respect to John Liiva, but Arch Enemy finally recovered from the stigma of never-better-than-the-first-three-albums. In a just world “Khaos…” would be the sole occupant of the top position of the end-year top ten for 2011. I know, new Opeth, Machine Head, Megadeth, Revocation coming out soon, but I already have my album of the year, so fuck all.

If you ever liked this band for anything you will love this album. To me, you are either AE’s fan or you’re not. I sure am. I honestly do not remember last time I was so addicted to one album I literally could not stop listening to. I must apply at least once a day in the car and once on iPod. There have been albums I awarded the magic 6 only to regret it in retrospect, Hypocrisy, Nile and Ulcerate, notwithstanding. But here, I actually think I am doing it disservice by rating it just a mere 6/6.This is one of those albums that just deserves more score than we can give it. So, I rate it 10/6 though I know I can’t go past 6 above.

When I ramble about the perfect marriage of brutality, melody and heaviness, I seldom can think of modern albums that fit this paradigm. “Khaos Legions” is such an album. It’s like before I met my wife I had a vision of a perfect woman for me and when I finally met her I just knew indubitably she was it. And like my wife became an archetype by which I now measure a perfect woman, so is this album a paradigm by which I shall from now on measure a perfect album. I just know a classic when I see one.

Thank you guys, thanks for pouring your heart and soul into this one and choosing the mighty Andy Sneap to frame it for a truly devastating effect. Keep up this quality on the future endeavors. Soilwork, In Flames, and hell, even Dark Tranquillity, eat your heart out. Metal Hammer (UK), a magazine actually worthy of its name says “slick, devastating and brilliantly sequenced, ""Khaos Legions" is an immaculate, ironplated ‘fuck you’.” I concur. Album of the motherfucking year, folks. You may disagree, but if so, I repeat after the heinous Dick Chaney: Go fuck yourself.

CHINA – Light Up The Dark

KRASHKARMA – Straight To The Blood