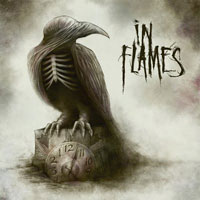 IN FLAMES – Sounds Of A Playground Fading

It sure sounds as though Anders Frieden, In Flames vocalist, had enough and, thinking the band is falling apart, he is ready to move on. I hope this mysterious monologue is merely a part of fictional world of the In Flames iconography for, if "Sounds Of A Playground Fading" is any indication, I don’t quite get why he would want to leave NOW. The new album is not only the best record IF put out since the 2002 experimental "Reroute To Remain", but, in many ways, actually surpasses it. "Sounds Of A Playground Fading" is a welcome return to the experiments of "RTR" without much of the annoying Korn references/rip offs, and it features much better, more mature, songwriting.

When Century Media emailed me the new In Flames record I was very excited. Although their previous affair, 2008 "A Sense Of Purpose" had some filler I found the more experimental ideas a step in the right direction. True, I am very easy to please (yes, ladies, even in THAT department), but having reached a pinnacle of their career with "Colony", in my opinion their magnum opus, In Flames could go one of two ways: either maintain the status quo and churn out multiple copies of "Jesters Race"/"Whoracle"/"Colony", or try something different every time, a little progression. What is the point of recording essentially the same album over and over again? Are we metal fans only or are we MUSIC fans, folks?

In Flames clearly chose the path of progression. "Clayman", "Reroute To Remain", "Soundtrack To Your Escape", "Come Clarity" and "A Sense Of Purpose" each retained In Flames identity while introducing new elements while improving on those already introduced on the preceding album. The clean vocals and progressive acoustic passages, as much as use of electronics were taken to a new level on Reroute and greatly expanded, though IF also sadly caught the nu-metal bug (Korn) which was evident not only from the music but from the vocals as well. While the next one, "Soundtrack To Your Escape" was a bit of a miss step, with its predictably strongest Korn influence to date and mediocre songwriting, the 2006 "Come Clarity" marked the return to form with solos and wonderful melodies in the forefront, a very balanced "Clayman"’s brother with virtually no Korn references and very little new experimentation.

The 2008 "A Sense Of Purpose" marked a significant decline in the sound “thickness” and “metalness” and partial return to Korn-ness. Most horribly, not just the songs, but the very ARTWORK AND LOGO were dramatically Kornized. Still, it was far from a disaster of "STYE", with its many classical IF elements, melodies and structure. One track, "The Chosen Pessimist" deserved special recognition for its daring near-industrial gothic nature, combined with Anders’ impressive vocals, even if strongly reminiscent of Nine Inch Nails. But "A Sense Of Purpose" was neither "Clayman" nor "Come Clarity" worthy.

…go back to the top…

Enter "Sounds Of A Playground Fading". In Flames, probably for the first time, created a record that is both In Flames through-and-through, with bursts of classic death metal past, but also finally successfully incorporated new elements. They appear to simply want to write and record music of their choice, and damn it, I ask, what is truly wrong with that? After all, it is THEIR music, past and present, it is THEIR execution, THEIR career and they risk losing THEIR fans if they fuck up or if the latter feels disappointed. Every artist, no matter the style or genre is FREE to take their sound to wherever-the-fuck they want to. We, consumers and fans, of course, have an equal right to disregard them altogether for it.

Yet In Flames have created something special here. Anders finally ditched the Jon Davis worship (though the logo is still pure Korn!), changed his hair style to his own, grew a beard and here he finds his own voice – vocals which are part the classic growl, part the effect of  self-imposed Kornization. Some hate these new vocals with a passion, but it is a matter of taste. I think, since the music so often is so dramatic and emotional, his vocals are a perfect fit. Most importantly, his vocal skills have improved tremendously on this particular record.

The funny thing is, at first, I was ready to write off this album as a total disappointment and even wrote a review trashing it with a final score 3/6. Then I gave it one more spin, on headphones. I listened simply for music. Jesus tap dancing Christ, is it GOOD MUSIC?, I asked myself. Right was Chuck Schuldiner (Death) when he wrote that “without judgment perception would increase a million times”. Once I accepted In Flames as they are in 2011 and made no claims about what they SHOULD sound like, I was able to fish out so much CLASSIC In Flames on this record that I doubt any release after "Clayman", with such deliberate time-machine bravado, can claim such an obvious throwback to the band’s past.

Think I’m bullshittin’ ya? Just listen to "Fear Is The Weakness" or "Enter Tragedy" and tell me that is not some of the most bitchin’ melodic death this side of "Colony"! These fuckers still got it, and unlike some of their contemporaries, are not afraid to prove it. The melodies and SOLOS are great to fucking amazing. "Darker Times", featuring TWO amazing solos is a case in point to the latter. The songs are also graced with simple yet effective and fresh breakdowns such as the ones on the fantastic "The Puzzle or Darker Times", which have not even a little bit to do with metalcore.

And damn these guys have a knack for melody! "The Puzzle", especially, has a fantastic, fresh and 100% original keyboard one at its conclusion. Melody is the greatest single reason for me to consider throwing the dough on the table of a record store. And In Flames have that in spades. The first four tracks are some of the most melodic, catchiest stuff they have ever written, with "All For Me" sounding like a forgotten track from "Whoracle" session. Ditto for "Fear Is The Weakness". Where the "Dead Ships Dwell" is so infectious, you’ll be wanting to play it over and over again. Especially the chorus is just tits.

I like how IF became so efficient and natural with harmonious co-existence of keyboards and guitars with time. The band is not even afraid to sound psychedelic, downright creepy on the short but very effective "The Attic", with Anders Frieden doing a marvelous vocal job, an obvious nod to some of the more experimental parts of "Clayman" where clean vocals were first introduced. It is also a good way to end the first half of the album, a very good half, for sure.

The 2nd half, though no less great, is largely dominated by the "Come Clarity" (think "Reflect The Storm") with generous helpings of good OLD In Flames. "Darker Times"’ riff IS very Kornish, kind of like "Wake The Fuck Up" from "Issues", but quickly turns to "CC" style melody with TWO out-fucking-standing solos bordering on virtuosity, I shit you not even a little. It also has an amazing genuine, brutal death metal growl in the middle passage, if you’re not paying attention you’ll miss it. This song, in part, reminds me of Dark Tranquillity, for some reason.

"Ropes" features classic melodic intro and material which wouldn’t be out of place on "Clayman", complete with a worthy solo, but overall, it is the closest to a filler this album ever gets, probably justifying a half point score deduction. Besides, it is completely and utterly obliterated by "Enter Tragedy", another throwback to "Whoracle"/"Colony" days. It is similar in pace and construction to "Fear Is The Weakness", a fast, classic melodic IF. "Jester’s Door" is very Depeche Mode influenced, all synths, zero guitars. "A New Dawn", one of the most experimental and ambitious track on the album, ebbs and flows, now teasing with classic IF, now introducing fantastic VIOLIN passages and acoustic interludes topped with an absolutely epic chorus where guitar work is second to none. It is one of, if not, the best, tracks on the album.

The only thing that may be perceived as an actual PROBLEM on "SOAPF" is the closer, "Liberation". This song is as far removed from In Flames sound as they have ever gotten before. It has a bouncy, reggae (!) verse followed by an extremely catchy and poppy chorus that reminds me of part Megadeth’s "Risk" and part Bon Jovi. Anders has absolutely out done himself vocally on this one. He fucking SOUNDS like Jon Bon Jovi, which, if you ever heard Jon sing, is a tremendous achievement. I keep getting 80s flashbacks every time I hear it and begin to consider Bon Jovi an actual metal band by comparison. This is what I would call a “hit”. In Flames should make a video to it and top the charts.  It is even complete with the classic cliched “I will be with you…tonight” lyric, a cringe-worthy move that costs In Flames additional half a point.

Now, I must warn you, though, once you pick your hard core metal-ass jaw of the floor after such “betrayal” you will spend the rest of the day trying to get that fucker out of your head, in vain. And I fucking love it. It is so uplifting, so positive, and I also think it is half tongue in cheek. Anders sings of salvation/liberation that is so awesome he must let others know how to attain it. A risky (pun intended) move for the band, but for me, it works in their favor. It shows that they can respect their fan base and STILL record whatever they choose at the same time. And that last sentence could very well serve as the summary of the whole album.

While the predecessor was somewhat disappointing after "Come Clarity", this album is In Flames not only doing what they do best, but also showing great maturity, talent, perseverance and innovation previously unattained. Sure, we all know that the first 5 or 6 albums are insurmountable classics, but so do they. They don’t try to resurrect the past, but merely massage it. They use it all to their advantage. It actually may be more daring than the latest Dark Tranquillity and is head and shoulders above current Soilwork. It takes balls and genuine talent to come up with something so familiar and so innovative and fresh simultaneously. And that is why In Flames deserve a high, even if not the highest, mark.

Album is not perfect by any stretch of imagination, but a worthy addition to any IF fan, of which I am one. If you are one, and appreciative of post-"Clayman" In Flames, especially "Reroute…" and "Clarity", do yourself a favor and pick it up on June 21st. You won’t regret it. However, hard core-In Flames-was-great-only-up-to-"Colony" types are, while highly encouraged to pick this up, also rather advised to stay the fuck away and seek contemporary replacements of In Flames of old in order to get your fix.

…go back to the top…