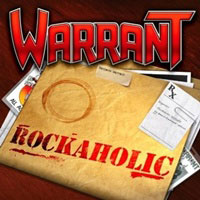 In the off again, on again saga that is Jani Lane and Warrant, it appears the core of Warrant have moved on and found their new front man in former Lynch Mob singer Robert Mason. With Jani leaving in 2008 over a songwriting dispute, “Rockaholic” sees Keith Olson man the production boards and 14 songs that showcase more of a smoother, blues-based hard rock sound than the hit years of “Cherry Pie” and “Dirty Rotten Filthy Stinking Rich”. Will the risk reap richer rewards?

Songs like the Southern rock-ish “Sex Ain’t Love”, the vocal-harmony driven “Dusty’s Revenge” and charging “Cocaine Freight Train” have this spirit of rejuvenation again in a classic 80’s band that proves they can still produce worthwhile original material in modern times. Robert Mason has the range and emotion to pull off this more stripped down, 70’s influenced sound that Warrant is approaching on “Rockaholic” – his best work including the mid-tempo, King’s X-like happiness of “Sunshine” and made for cruising highways “Innocence Gone” that includes some feature bass stomp from Jerry Dixon. And for all you slow song ballad lovers, “Home” resonates in classic Warrant fashion with a tinge of Firehouse and Bon Jovi in the mix.

Unlike the mid 90’s Warrant who attempted to keep up with the changing tides and met with plummeting audiences (“Ultraphobic“ anyone?), the team of Joey Allen, Erik Turner, and Steven Sweet along with the aforementioned Dixon and Mason poured their heart and creativity on the table with this one- and this should send some cash registers abuzz as well as put a few more people in the concert seats. As close as a surprise comeback as Ratt from the previous year- don’t discount the breadth of talent from the Sunset Strip.