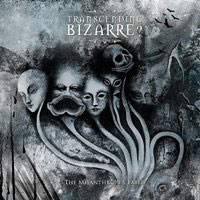 Transcending Bizzare proudly proclaim their eclectic and bizarre nature, musically as well as lyrically and visually. To the regular black metal fan this might appear bizarre or avant-garde, but as an experienced avantgarde fan, I find TMF to be pretty straight forward. This is symphonic black metal with the occasional odd melodic twists and turns.

The vocal style appears to be a blend of Nagash/Lex Icon around “Nexus Polaris”, and Arcturus around “La Masquerade Infernale”. The production is good and the musical performance is well executed. The prominence of symphonic arrangements on TMF is perhaps what makes the band stand out from run of the mill symphonic black metal. The album is prominently focused on emotional content in the vein of film scores, which leads to less focus on interesting riffing and accessible melodic content.

The album does have its more accessible moments too, but none of which sounds as original as the band obviously was going for. Their symphonic arrangements are pretty standard, and their turning to talkative quiet parts isn’t as eclectically innovative as the band tries to be. On their last album, they did have technical riffs that spiced up their expression on most songs. Those riffs are sorely missed here.

All in all this is not a bad album. If you want symphonic black metal that steps a bit outside the boundaries of the genre, but still maintain its idiosyncrasies, Transcending Bizarre might be the way to go. Their careful challenge of the symphonic black metal stereotypic expression makes them fall in between two chairs though. They are too strange for traditional sympho-black fans, but not strange enough for avant-garde lovers. If you want real symphonic/black metal/avant-gardism I suggest you check out Le Grand Guignol’s "The Great Maddening", or Ebony Lake.