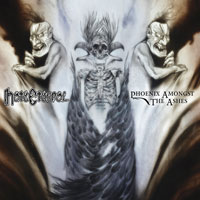 HATE ETERNAL – Phoenix Amongst The Ashes

When Erik Rutan isn’t producing some of your favorite death/black metal platters by bands like Cannibal Corpse, Nile and Vital Remains, he’s singing and wielding his own axe for Hate Eternal. The fifth album “Phoenix Amongst The Ashes” continues in the trio’s stock and trade – a cacophony of whitewash speed, deep bellows, and death metal done with roaring apocalyptic abandon. It’s a wonder his fingers or wrists don’t lock up on “The Art Of Redemption” with a 54 second introduction note blitz that gives both hands quite the workout. From the incessant Jade Simonetto blast beats on “The Eternal Ruler” to the marching strains of closer “The Fire Of Resurrection” , Hate Eternal won’t be mistaken for anything other than Florida born death metal, taking the work of Malevolent Creation and Monstrosity to warp 100 degree.

My personal preference lies with the technical workings of Obscura or Atheist over Hate Eternal, but it’s understandable why this band have a loyal, stable following. Like going to your favorite restaurant that serves the delectable entrée you’ve been craving all week for, “Phoenix Amongst The Ashes” will not be mistaken for anything less then balls to the wall, adrenaline-laced destruction.

The new death school people will eat this up. The diehards who discovered death metal with the Florida and Sweden scenes during the late 80’s and early 90’s – not so much. I commend the ability, yet “Phoenix Amongst The Ashes” doesn’t settle with my brain and thus meets with my critical indifferent response.