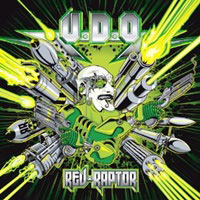 Surprise of the year for 2010 would be the unbelievable Accept comeback album “Blood Of The Nations” sans Udo. I’m sure even Udo himself didn’t expect such a strong commitment to their legacy while also benefiting from today’s thicker production scope. Yet U.D.O. the band hasn’t lost any ground, consistently releasing a new studio album every 18-24 months and playing to sold out audiences on all corners of the earth. “Rev-Raptor” will hit the streets in multiple formats, including 2 bonus tracks for different territories that other markets won’t receive – which I believe isn’t as much of a savvy cash ploy as its a desire to keep physical sales steady in a digital driven world.

“Leatherhead” and “Rock N Roll Soldiers” already received my word waxing on last month’s EP release, so let’s delve into the other 11 cuts making up the core of U.D.O.’s latest metal cocktail. The songwriting doesn’t stray far from the traditional formula – you’ll get the faster, double bass driven numbers like “Renegade” and “Dr. Death”, the slamming mid tempo classics such as “Terrorvision” and “True Born Winners” (the latter opening with a guitar salvo reminiscent of “The Spirit Of Radio” Rush) and the slower, moodier ballads done in the unmistakable Udo ways with “I Give As Good As I Get” and closing effort “Days Of Hope And Glory”. Unlike a lot of rough and tumble metal singers, I don’t think Mr. Dirkschneider really has lost much of his rasp or range through the years – a testament to his care and concern for the gift of such a special, one of a kind voice.

I don’t get the drum tone on this album – it’s very mechanical and cold, which may work for the heavier songs but when the band picks up the pace sounds a tad too click-clack typewriter-like when I know drummer Francesco Jovino is totally capable to deliver thunderous patterns and fills. For a change, you’ll get no quirky left field tracks – it’s pure metal throughout. Otherwise “Rev-Raptor” will quench the U.D.O. faithful, adding a few more sing-a-long anthems to the tour set list in hopes we don’t see his retirement anytime soon.