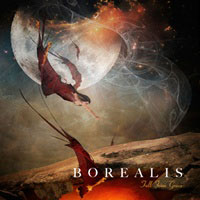 There’s something about the Canadian metal scene that just screams unity. People come out of the woodwork for shows – be it local affairs or national/ international bills. Reminds me very much of the music as a lifestyle versus music as mere entertainment debate that I get into with people in the United States when they wonder why it’s so much harder to appeal in the current ‘easy fix’ marketplace. Hailing from Ontario, Canada, this progressive metal quintet have built quite a resume in their six year lifespan – from opening for some of the better acts in their genre like Sonata Arctica and Kamelot to bringing down the house at last year’s Progpower US festival, setting themselves up for this second album “Fall From Grace”.

On my first pass it’s instantly understandable why Borealis are turning heads and receiving accolades from all parts of the world. Their style is an energetic amalgam of progressive metal, with a rhythm section unafraid to tackle heavier, passionate tempos and fierce double bass work from Sean Dowell along with an emotionally charged singing performance from vocalist / guitarist Matt Marinelli. His voice has that Zak Stevens deep delivery on exciting tracks like “Regeneration” and “Take You Over” and confidently can navigate around the highs just as much as his mid-range and lower capacities – the latter explored on the shining ballad “Watch The World Collapse”.

Musically Borealis certainly bring Savatage, Evergrey and Vanden Plas to mind – but don’t for one minute believe they are merely cutting and pasting from these bands catalogs and attempting to push these 9 songs off as their own. “Finest Hour” has a little bit of that Mercenary / Soilwork thrash charge out of the gates, quickly mutating into a battle between progressive verses and more straightforward heavier transitions or instrumental sections. The melodies within the title track travel into happier terrain, deftly maneuvering around the pulsating Sean Werlick keyboard parts and slamming guitar/drum tempo changes. The focus remains full force on arrangement separation – with no track over 6 minutes, Borealis keep the proceedings moving efficiently while packing the song with maximum excitement and entertainment value- all the way through to the Kamelot-like dark power ending “Forgotten Forever”.

“Fall From Grace” should have legs to launch Borealis on par with the veterans in the power / progressive metal scene.