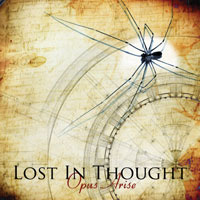 Outside of Threshold and To-Mera, I can’t say I’ve been avidly following the UK progressive metal market as of late. Hailing from Wales, Lost In Thought formed in late 2007 with guitarist David Grey and bassist Simon Pike, filling out the lineup with keyboardist Greg Baker, drummer Chris Billingham and vocalist Nate Loosemore. After recording an EP in 2010 that grabbed the attention of the well known progressive/power metal management team Intromental Worldwide, leading to this quick buzz and a debut album “Opus Arise”.

Of the eight songs on display, many of them feature a modern mix of thick guitar passages and spacey keyboards that are up to the task of finger maneuvers much like the other European contemporaries such as Pagan’s Mind or Circus Maximus. Nate’s natural range and phrasing will remind most progressive followers of a cross pollination between James LaBrie (in terms of the high range note suspension) and Andrew ‘Mac’ McDermott (for his emotional scope and comfort in the lower levels). Musically songs like “Blood Red Diamond” and “Delusional Abyss” have that dynamic edge that most American acts push for in the genre while also attaining a sweeping epic atmosphere that many current European bands express through their songwriting. “Lost In Thoughts” features some cat and mouse rhythmic chase sequences between the drums, guitar, keyboards and bass- certain to delight and excite when taking in these songs in live clubs or festival settings. I’m not quite as keen on the ‘melodic metal-core’ elements that creep up from time to time during some of the instrumental sections of songs (the opener “Beyond The Flames” contains some obvious parts), as I feel it’s like spilling toxic oil into pure water and unnecessary.

“Opus Arise” is a decent start. They have all the right tools and tricks of the trade in place to capture the deepest, most passionate fans. Lost In Thought need to expand beyond their obvious influence roadmap on the follow up, and I believe they will as confidence and personal chemistry come together.

Biggest plus? At least it’s not Dream Theater part 100…

LABRADOR – The Intruder In Your Eyes

POWER THEORY – Out Of The Ashes, Into The Fire