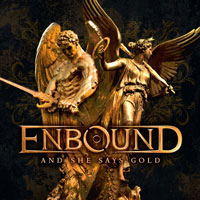 ENBOUND – And She Says Gold

Sweden and melodic power metal appear to melt together like two soul mates – such is the vision carrying vocalist Lee Hunter, drummer Mike Cameron Force, guitarist Marvin Flowberg and bassist Swede in this new act Enbound. “And She Says Gold” contains 14 songs, running the gamut from guitar driven riff energy numbers like “Squeals Of War” and “Shifting Gears” to more vocal oriented, mid tempo to ballad affairs such as “Descending” or “The Broken Heart”. When they incorporate some of the keyboards to fill in the gaps, you get the feeling that Axenstar is a good reference point for how to do this appropriately – evidenced on my personal favorite “Noiseless Bullet”.

The gold themed visuals on many of their promo pictures reminds me of the time period where Metalium went down this road in their early years. Guest vocals from Lagaylia Frazier come in on the duet “Frozen To Be” – and she compliments the wide range of Lee Hunter, who straddles the lines of AOR, classic rock and melodic metal with his voice. It’s hard for me to believe that at 20 years young Marvin Flowberg amazes with his tender feel and impressive technique – not just in the spirited solo lines but his skill to transition from heaviness to clean parts without losing a measure. His best work appears on “Under A Spell”, where he’s unafraid to reintegrate the main hook in his solo parts instead of blitzing your ears with a thousand note self-serving axe exercise.

Enbound have that ability to produce memorable songs and also exude confidence rarely seen or heard in a newer melodic metal act. If I had to place reference points on the group, the darker, off-time elements of Evergrey come headlong into groups like Harmony or Tad Morose. Bravo gentlemen – this could be the start of a long career.

RADIOHEAD – The King Of Limbs