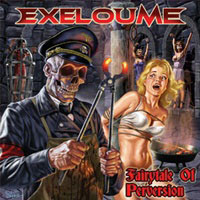 Throughout metal’s history, there came points in time where genres exploded, burnt themselves out and resurrected due to new blood infusing their creativity and pouring out new product. Norway’s Exeloume on their debut album “Fairytale Of Perversion” appear to step their stylistic toes into dual thrash and death waters. Recording a four song demo “The Longest Shadow” that came out in 2009, the five-piece completed their lineup in the fall of that same year with vocalist Øystein Haltbakk, who also fronts Pica Fierce.

Lining up all the necessary parties to improve the professional aspect to art and sound (Ed Repka with the cover, Dan Swanö and Andy LaRoque for guest appearances, mixing and mastering help), Exeloume have that technical push a lot of the latter day thrash acts began experimenting with in the early 90’s along with the brutal tones and ferocity that early death acts unleashed. Bands like Dark Angel, Despair, Coroner, Toxik and Atheist come to mind when taking in outstanding songs such as “Ignorance Is Bliss”, “Hellhole”, and “Faceless Children”. Guitarists Andre Ulriksen and Tom Wahl fly the fingers of fret flurry around this album, somehow keeping the material catchy and maintaining a sense of groove through “Blind Billions” and the insane speed monster “Psychopath”. And holding down the drums, Alessandro Elide must expend pounds of sweat and energy with every performance, as there’s rarely a moment’s breath in his cymbal explosions, fleet fill work and tempo snare/ double bass juggling.

Exeloume probably won’t get the front coverage they should deserve because some will struggle to fully wrap their headspace around a band who can be creative, technical and catchy at the same time in the thrash/death world. “Fairytale Of Perversion” could be a gateway album to give the current generation a benchmark to aspire to, and let’s hope this isn’t the last we hear of this group.

ENBOUND – And She Says Gold