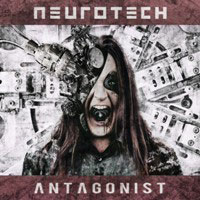 Industrial metal is perhaps a vague description, but nevertheless accurate when it comes to Neurotech. This Slovenian trio has made an album that sounds similar to Covenant’s "Animatronic". The drums are programmed and mechanically fitting the monotonous industrial sound. The singing style is somewhere between Lex Icon and Samael’s Vorph, and the melodies are accessible, but also predictable.

"Antagonist" actually gave me a pretty good first impression, as I have learned to really appreciate "Animatronic" over the years. Especially the light orchestration is a nice touch. After repeated listening, however, I quickly lost interest. Part of Neurtech’s problem is that the album is repetitive and too monotonous. Most songs are in mid- to slow mid-tempo, and the melodies are not exactly challenging.

If you dig later Covenant or Samael, Neurotech is worth checking out. But don’t expect anything out of the ordinary. The album would have scored a little higher with more variation. A nice exception is my favorite track on the album; “A Hollow Impression”. This song is a bit faster paced with nice understated orchestration and futuristic samples. Not much wrong with this album, it just lacks in identity and originality. They do have potential though…